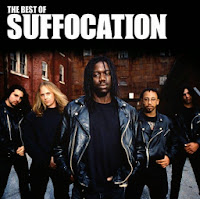 Interested in hearing the best of Suffocation? Then listen to Effigy of the Forgotten, Blood Oath, or Pinnacle of Bedlam. In fact, I feel fairly confident in recommending that you purchase any/all of those records. Or Pierced from Within, a record I've slowly warmed to over the years but is much beloved by the brutal death metal audience at large. If you instead want to have your ears gouged out and intelligence abused, then go ahead and entertain Roadrunner's Best of Suffocation compilation, a staggeringly cheap and transparent ploy to further reimburse themselves for an investment which creatively ceased to be 13 years before this thing was cut and pasted into existence. Now, I've ranted endlessly about this label and their compilation$ in the past, but sometimes one will sting a little more than the next, and this would be that one.

I've read passionate, lengthy polemics about how Master of Puppets or Heartwork or Blut Aus Nord or Opeth or whomever/whatever 'killed' metal music, but I'm going to let you in on a secret: these are all folly, or we wouldn't still be listening to, writing about, performing or giving a damn in general about any of this shit. But I will say, Roadrunner, once a champion of the form in the later 80s or early 90s, tried really damn hard to achieve this result with their transformation into nu-metal's vanguard institution. For fuck's sake, this was the label that released Abigail, Don't Break the Oath and The Final Separation. How do you go from that to Nickelback, Killswitch Engage and Slipknot? Sure, it's all about numbers...Malevolent Creation and Defiance just weren't sellin, dawgs! So roll out the great wiggafication of the genre, ensnaring those Limp Bizkit pundits who might want something a little harder, a little groovier. Death metal? What's that? Oh yeah, we still own some of those recordings, so let's mix and match tunes from them onto another disc, press a few thousand copies and pay for this year's holiday office party...

The result: 13 years after Suffocation stopped effectively giving a shit about their alma mater, the favor was not returned, and the Best Of was born...err, strategized. Let's do some quick math: Suffocation's first three full-lengths had 26 songs between them, and this collection features a dozen of them. So, basically almost 50% of the material was shuffled around and placed on this disc, a band picture was slapped on the cover and then it was off to the races. To be more specific, it's a 5/4/3 split between Effigy of the Forgotten, Breeding the Spawn and Pierced from Within, which might stun some folks who clearly think the sophomore was the best thing since sliced bread and...why isn't it more strongly represented against its inferior older siblings? I personally enjoy the debut material the most of this but, then, I OWN the things...just like every other Suffocation fan who might have been the target audience for this CD. Can you imagine who might have actually picked this up? Some crackhead poring over the Fear Factory selection at his local Sam Goody slash F.Y.E.? "Shit, I fucking need that, Roadrunner be da joint."

Now, we can debate all day whether a brutal death metal outfit, even one so celebrated as these New Yorkers really warrants a 'Best of' or 'Greatest hits', something that at best should be reserved only for bands with like 30-40 year careers and even then I'd rather have a rarities package...but at the end of the day, death metal is not 'pop' music. Fans are generally interested in the 'album' as a medium, for both its aural and visual aesthetics, its complete package, and the Best of Suffocation does not in its wildest dreams sate that need. By 2008, anyone interested in just checking out the band who had not previously heard them could look them up on Youtube or any audio sample available and then decide whether they were worth pursuing, and that all adds to this being even more fucking useless. If, say, Roadrunner dug around in their gold-plated vaults for rare sessions from the first three records, and then put this out in like 1997 with a 2-3 disc spread, booklet, band approval, photos, live material, then it wouldn't smell like so much snake-oil...

Yeah. Oil. Grease, for the palms...or like the kind that was likely streaked, in large amounts, through the hair of whatever person green lit The Best of Suffocation, another disappointing turn for the worse that makes the Coal Chamber debut seem like the Renaissance by comparison. Even if you have never heard this treasured death meal band in your life, should you come across a copy of this in the wild then I'd urge you to run over it with your car a few times, or if you're the 'green' type, send it in for recycling. Directly after that, go and download the first three Suffocation records so that you can either appreciate them in full, scoff at them or simply whine about the production on Breeding the Spawn. Rinse and repeat with The Best of Malevolent Creation. The Best of Obituary. The Best of Good Band X We Once Deemed to Promote Until We Decided to Lose Our Minds and Get Down Wit Jonathan Davis and the Sickness. 'But, man, dese songs are so good I wanna buy 'em twice on CD.' Yeah, well I want you to die twice, but that ain't happening.