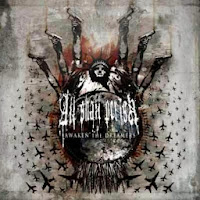 Awaken the Dreamers is an earnest attempt to smother the chugging fundamentals of its medium into something so heavily glazed with ideas that it would impossible for me to dislike it; even if I face the nagging realization that, stripped bare of its melodies or 'toppings', I'd be left with one boring pizza pie of slogging palm-muted grooves that add absolutely nothing of value to the deathcore spectrum. That goddamn awful logo unfortunately remains on the cover, almost like a reminder of the ghetto brickwork 90s mosh mentality All Shall Perish seems to consciously or unconsciously champion despite its more musical leanings, but otherwise I'd have to say I enjoyed the artwork more than their other efforts, with its (literally) six-gunning Statue of Liberty and the symmetric clouds of jet fighters that flank it. If only the middle of the picture was vomited upon by this generic relic of a logo, we'd be in business at last...

Musically, though, All Shall Perish and I are just about to seal the deal, our right hands skin on skin without yet giving a firm shake. The effort put into this record is laudable, despite its faults, which almost all center on the continued overuse of warlike Earth Crisis chugging rhythms that structurally go nowhere interesting. It wouldn't be difficult for musicians of this caliber to find a solution...for instance, kicking the bland chords or adding some dissonance second and third notes to the palm mutes, you'd instantly get something deeper than the deathcore (and previously metalcore) breakdown status quo. Fortunately, the guitarists compensate with a bewildering amount of higher string exercises that range from modern Swedish melodeath sequences, or tapping patterns that often remind me of 8-bit video game classics if they were being arpeggiated by crack whore shredders, or just flashy scale-work that just seems to fit over the banal foundation well enough that you, as the listener, can consign the rhythm guitars to another piece of the percussion kit. Which I think was the Californians' intent, to continue pushing themselves without alienating the fistfighting anthems that spurred on its original audience.

There are slick, jazzy breaks, and segues where All Shall Perish seem to flirt with metal inspirations of a more progressive nature, but to be honest these often feel like they're just abrupt transitions in which they're attempting to throw a surprise left hook at you when they really need a more impactful uppercut. Don't get me wrong: it's a joy that they see fit to expand themselves without losing that violent core, but occasionally these metalcore/deathcore groups seem as if they've just put together their tracks piecemeal, and even on this solid album you could probably switch off a lot of the riffs and breaks between different songs and come up with a similar result. It's more modular than built of strong individual songs, and so there aren't a lot that I found enjoying in full...I simply could pick out a lot of smaller passages within them that were pretty cool, and yes many of those were melodies or leads. The bass playing continues to count here, with loads of groovy fills in tunes like the title cut that keep the music multi-faceted without detracting from the busyness of the guitars. Matt Kukyendall's last studio performance with the band is likewise fit: flawless footwork, no shortage of fills and a clean capacity to match the jazzier tempo shifts that populate the experience.

As for Hermida's performance, it's pretty much on par with the sophomore album, only he brings in some cleaner emotional vocals that remain fortunately subdued rather than reaching for that radio accessibility so many of these bands shot themselves in the arse for. I was quite shocked to hear Cam Pipes of 3 Inches of Blood add some screaming harmonies to "Black Gold Reign". I am nowhere near a fan of that band, who I find to be corny, ironic and not the least bit funny...but even I have to admit that in this context, it creates a more compelling texture against the expected chugging of the rhythm guitar, and I almost wished that they would have used him more throughout. That said, Hermida himself continues to show some promise as he continues to evolve towards that status of 'distinct deathcore frontman' (which sadly it seems he will be cultivating further in another band). The lyrics are admittedly the bland, personal stuff you'd expect out of 90% of 90s hardcore, nu-metal and so forth, eliciting zero curiosity and painfully little standout imagery that you couldn't find on even the least interesting Converge record, but the delivery is at least genuine.

I really enjoyed the 'experimentation' like the lush ambient/acoustic guitar pieces "Misery's Introduction", "The Ones We Left Behind", or "Memories of a Glass Sanctuary" (with vocals!), which flow surprisingly well into their more brutal neighbors, but I don't think in the end I came away from Awaken the Dreamers with the impression that it was a truly memorable outing...just a damn polished one that plainly exhibits a mutual musical advancement among the membership and a willingness to embrace external ideas without shafting those that have stuck with them since the beginning. Aesthetically I prefer the more clinical/brutal death metal exhibition that Job for a Cowboy utilized on some of their full-lengths, as a poster child for positive growth in this field, but as much as anyone might want to write off All Shall Perish as another 'me too' band that was signed to a large label based on the emergent deathcore trend, records like The Price of Existence and Awaken the Dreams proved that these gentlemen were absolutely not duds. Relegated at large to the 'second string' of the niche, perhaps, but I'd attribute that more to them lacking the emo-hipster-youth attuned art direction and rock star attractiveness that several of their peers flaunted to reap the admiration of the girls and bois in the audience. Musically, these Californians are on point, and even better than some of the shitty, overhyped acts in their medium.