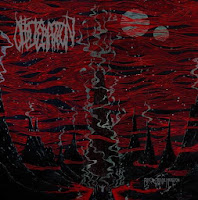 So, what exactly constitutes a great death metal album in the year 2013? In the 80s, the answer was pretty clearly defined as a record that was frightening, shocking, or breaking new ground through the guttural vocals and increased intensity of thrash techniques. In the 90s, technicality and progression took over, not to mention a bunch of bands attempting to lyrically out-sicken one another. In the 00s, it was studio polish, groove, cross-genre pollination and ultimately, the inevitable slowing down of the innovations that got us there. As for the 20teens, well thus far they've seen the cannibalization of all prior decades, whether in conjunction or in specific worship of a particular scene or trend. So I am forced to adjust my initial answer. A great album, in any epoch, is one that you fucking enjoy. While I'm not ruling out the fact that small nuances and innovations are still trickling into the genre, a great album in 2013...is one that you fucking ENJOY, and don't let any message board Gestapo or cliquey checklists of 'cool' attempt to convince you otherwise. You don't want to be 'cool', friends, you want to be death metal. As your daemonic counsel, I must insist!

Black Death Horizon is an album that I really, really fucking ENJOY. It's an anomalous, oppressive 42 minutes of proto-death metal influences churned in a vat, stirred to a relish-like composition and then served to you on a rotten bun. It cultivates everything from a raw punk and thrash inspiration to dismal, doomy Autopsisms and Incantationality while marginally altering the strategy of the prior two Obliteration full-lengths, both of which I also...really ENJOYED. It's not quite so brutal and direct as the debut, nor so slimy and squamous as the sophomore Nekropsalms, but more like an atmospheric ritual being evoked on a hellish mountainside where the trees have all been burnt clean by volcanic activity. Caldera metal?!? I want full credit for that. Of course, Black Death Horizons, like almost any death metal record you're like to hear in 2013, is really just a combination of precursor components configured into a slightly new way. Broiling tremolo-picked patterns burst from stretches of moody, death/doom disdain that subsist off dank, uneasy harmonies, and d-beat rhythms weave an undead thuggishness...and happiness is nowhere near at hand, with any and all melodic sensibilities confined to discomfort. Even the leads roil about aimlessly and excitedly like plumes of molten spunk being fired off into the cervix of the ash-caked sky, and ultimately, the Norwegians pulls off what so many bands cannot: a death metal record that actually SOUNDS evil.

It's not excessively catchy beyond just a handful of riffing progressions (like the Arabesque tremolo guitars in "Sepulchral Rites"), but it's brutally functional and persistent due to a number of employed techniques. For one, the vocals here are howled and grating rather than disciples of the typical guttural blueprint. I'm not sure how many takes it took Sindre Solem beyond the first to finish off each tune, but they sound so genuine and tormented rather than clinical, brickwalled and forced. Just the right level of reverb, and a rawness of feeling which guarantees variety in almost any line or chorus. Another is the voluminous, distorted bass lines that provide a bulkiness against the more straightforward clarity of the rhythm guitar chords. This creates a base ugliness to the proceedings that recounts some of the murk of the sophomore, but complements rather than contrasts the airy hostility of Torp's axemanship. Also, props to this guy for his constant feeling about the fretboard, a parity explored through all the layers and textures of higher strings employed far more often than banal open chord chugging. Black Death Horizon is not an album of breakdowns, but a movement from one bleak ritual to the next which occasionally deigns to rock your goddamn socks off. It's such a natural flow to it that it sounds the natural throughput of twisted minds, not the meticulous mosh hymnal you'll find of most modern death metal. Thus, this fully falls into the 'retro' or 'nostalgia' camp without obeying the rules.

Also have to complement the drumming, which shifts between warlike, sparse cadence to a more black metal based combination of snares and kicks through the blast-work. The title of this record is no joke, I do actually feel like fans of older Mayhem, Marduk and Darkthrone will get just as much a kick out of this effort as those seeking another Altars of Madness, Onward to Golgotha or Mental Funeral. There's an unpredictable nature about how they've written this (much like the second album) that keeps it fresh and frightening throughout, and the bonus atmospherics like cleaner chanted vocals and ominous droning throat passages show an ethnic flexibility in musical influence that promises the unusual. Not that they're the first group to pull this off, but they do it with restraint...never seeming out of place or like some shallow stab at sounding 'different'. Black Death Horizon makes as much sense musically as a fiery cataclysm that ends civilization by blanketing the firmament with a blanket of soot. In listening, you can just hear all the humans choke through their final moments as they reach forth to touch any glimpse of a glittering star beyond the hazy death beyond their reach. The lucky ones will be disintegrated in magma, but not you, fair listener...no, you will suffocate until the very end, watching your neighbors and loved ones perish. That's the sound of one kickass death metal disc, venner.