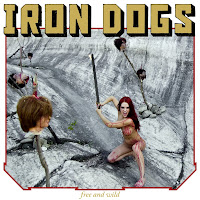 When all else fails, use the photo of a sword-wielding, blood spattered, naked barbarian amidst a field of impaled, severed heads as cover art. Iron Dogs have done this twice now...the last time, on Cold Bitch, the model had a pack of wolves at her heels! Brilliant. Were those wolves on retainer? Were they 'fake wolves' i.e. dogs? I may never know, but the catch is: NOTHING else fails, because even if these Canadians had a grandmother, fully clothed, knitting a blanket in a rocking chair, they would still kick ass. But wait, the grandmother could be a younger woman, naked...knitting her victim's skin into a robe...with blood running down her...there I go again with the ideas. At any rate, you may have seen some of the band's promo pics, where they appear much like a Metalucifer from the Great White North: denim, leather, spikes, sunglasses, patches, attitude, and vintage vinyl and cassette collections that would make a lot of today's 'we were too young to be there' crowd cringe in jealousy...in fact Jo Capitalcide is kinda like the Canadian version of Joel Grind.

Note that, while the group's sense of humor is obvious, there is absolutely nothing ironic about any of this. The Iron Dogs, whom I'm assuming took their name from the Exciter song (I'd be pretty upset otherwise), are lovers of classic speed, heavy and thrash metal, and if I'm not mistaken, Capitalcide even DJs the stuff. And that is what comes out of their instruments: a highly melodic and driven hybrid of cult NWOBHM and speed metal which draws on such a wide berth of obscure influences that it actually seems sort of original. I heard everything in here from Anvil and Manilla Road to, Diamond Head, Angel Witch, Samson, and the prominence of the melodic guitars even reminded me of the better Sound Barrier stuff. Combine this with the respectable but lower fidelity production standards, lyrics that are not at all cheesy but heavily inspired by pulp fantasy and horror fiction, and you've got yourself a genuinely awesome sophomore record. I was a bit late to Cold Bitch, only hearing it for the first time earlier this year, but I think Free and Wild is actually a little better, with a more resonant and atmospheric nature that doesn't at all seem like a bunch of guys just taking the piss. In fact, despite the throwback songwriting sensibility, this actually doesn't seem to dwell too heavily in the past...Free and Wild isn't just a good heavy metal record for some mythical year of 1983 in an alternative historical timeline...it's a great one for 2013, in THIS timeline.

The one caveat might be that Jo's voice takes some adjusting to, if only because it's so 'blue collar' and honest that it might not sate an audience blood-lusting for the traditional screamer. Though his voice isn't quite the same, he reminds me more of a front man like Steve "Lips" Kudlow or Mark "The Shark" Shelton, or some of the lesser known NWOBHM dudes: rough around the edges but capable of using those flaws and limitations to their advantage. Capitalcide might sound like a guy you'd hear at the local karaoke bar (after a few beers), but he makes due, and in the end, he serves as a strength to the record, giving it some character it might not otherwise possess if it were helmed by some trained European professional. I mean I wouldn't trust Fabio Leone to have my back in an alleyway brawl, but this guy would do in a pinch. A lot of passionate, raw howling and wailing, even if he's not capable of Halford squeals. I also dug the use of reverb on a few of the harder tunes, at times it recounted the first Overkill LP Feel the Fire stylistically; and there are a good number of manly backing vocal parts that enforce the choruses and add that 'communal' excitement you felt when the genre was still pretty exciting and you wanted to sing along with the other 15 people in the crowd.

Curiously enough, though, while the band brands itself as 'speed metal', and I don't disagree, they take a mildly different approach than some of the new bands exploding out of Finland or the US, who seem to take the former half of that equation quite seriously. Not that Iron Dogs play slow, but their take on the niche is more in the classical sense where it was mid-paced rhythms with punkish chords. Only the Canadians layer on so much melodic picking, through the verses, choruses and bridges, that the tunes take on a decidedly epic heavy metal feel that fits like a hand in a glove with their lyrical themes. This is the component that truly places them in that late 70s/80s epoch sonically, delivered with a blissful, down to earth tone reminiscent of how Deceased handle all their own melodies on the later albums. Curiously, these melodies are actually cranked up loud enough that it often makes the vocals and rhythm guitars seem more like atmospheric embellishments, which works better than you'd think. Leads and backing bridge riffs are all sensible, nothing feels processed or impossible to pull off live, and the rhythm section here is fucking monstrous. The drums hit hard and definitely ramp up the heaviness and emotion, with thicker kicks than you might expect; while the bass-playing is some of the best I've heard on one of these retro outings: dense as syrup, constantly engaging and laying in fills against the melody that contribute to the songs' depth and atmosphere. The songs are concise and well developed, never once eclipsing the 5 minute mark, and the riff selection is as varied as you could hope...even the sparse synthesizers are tasteful, atmospheric and evince nostalgia.

Free and Wild just sounds great, period, and if you disagree there's a redhead waiting to take your head, and a stick in a stone pass waiting to display it. Not that Canada hasn't done me a solid many times in the past (Voivod, Razor, Anvil, Celine Dion, Exciter, etc), but both Cold Bitch and Free and Wild are so entertaining that I'm almost willing to forgive my northern neighbors for 3 Inches of Blood, who sound to me about as hokey as Iron Dogs sound legitimate. In a year where old timers like Satan and Attacker have been kicking ass, taking numbers, and showing us all how it's done, it's so nice to know that there's a newer group ready and willing to take up the torch. Free and Wild isn't completely perfect, a handful of the chord progressions a little on the generic side, but it IS roughly 30 minutes of 'cult' heavy metal at its best. Well aware of its own triviality and history. Not in any rush to break any speed limit. Just to settle for some memorable licks and lyrics and let you figure out the rest. Which, if you're not a poseur, you will. Stat.