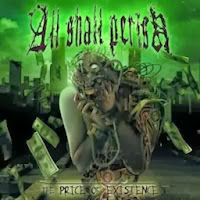 I've noticed an interesting trend in how I, a person with only a cursory or moderate interest in deathcore as a valid musical outlet, differ with the 'core' audience of the style in personal perceptions of what makes one of these records good or bad. A lot of dudes are looking for something as brutal and fistfight-worthy as possible, with little regards to the musicality involved, the ambitious or innovative grounds being staked out by the artist as to how they can distinguish themselves from a whole horde of other brutal death or metalcore outfits. They don't want anything to get in the way of that sheer physicality...I mean at the extreme end, I've known fellas who go to gigs to fight, not to give a shit about the music, although strangely enough some of these guys seem to simultaneously respect and air guitar to soulless technical noodling...basically two ends of the spectrum in complexity, colliding. Is this what metal has boiled down to today for the audience first reared on hardcore, metalcore and nu metal?

Whereas, I'm sort of the opposite...I want to hear how this urban/suburban blight might transform itself from the same breakdown shit I've heard repeated over and over since the former half of the 90s, into something more memorable and compelling in riffing choices. Truth be told, I'm all about the songwriting, which dates back to my own experiences delving into metal since a very young age in the late 70s...not that 'songwriting' precludes a heavily mosh/breakdown-based palm-mute panorama by any means, but how those sequences are often balanced against other to create something I want to listen to repeatedly (or not, but in that case they would have to be some truly infectious slugfests). I bring this up because, as they've progressed through the years, All Shall Perish seem to be of the same mindset, ramping up the melodic death metal influences in their songs as they've grown their audience and musical proficiency. The Price of Existence is almost instantly a more musical entity than its predecessor Hate.Malice.Revenge, thanks to the faster melodic picking and attention to spurious leads, but clearly the beatdown rhythms have not themselves 'perished', since they comprise much of the support to the flightier, fickle guitar work.

I'm not saying it's that much better than the debut, because for all the increased effort the majority of this music is far too quickly forgotten, but here at least as a record I can sit and listen through and actually perceive a handful of ideas that don't bore me straight from the starting gate. This is of course the record where they picked up Hernan Hermida on vocals, and while he's nothing extraordinary in this field he has a pretty seasoned palette of painful growls and sneers that at least surpass his predecessor in quality, as he seems to so effortlessly dive into the faster syllabic passages or belch forth a sustained Tomas Lindberg style snarl. And yeah, At the Gates is still a pretty good comparison, only add in the surplus of fisticuff chugging progressions and dour hardcore chord components circa Hatebreed/Earth Crisis, as well as a slightly more surgical approach to the guitars that involves rapid arpeggiated runs or clinical picking that recalls the operating table thrash that tech death borrowed from European gods of the 80s (sung and unsung) like Pestilence, Carcass and Deathrow. In fact, I wouldn't go so far as to say I enjoyed much of the album, but it's got particular pieces that really appeal to my ears, and it simply clobbers that first effort.

Special mention to the bassist, Mike Tiner, who makes himself known here with some swerving and busy grooves and lines that lend a greater depth to the choppier, clinical guitar elements in tunes like "Prisoner of War". The leads, too, while not so scathingly memorable that you'll think of them outside the experience, have a more emotional and melodic range to them ("Better Living Through Catastrophe") which really reinforces that All Shall Perish was not interesting in sticking around Beatcore Browdownland for all eternity, but in achieving that very important balance. Which, honestly, they do here. The Price of Existence falls short of success for me only in the fact that as well-sharpened the band's utensils have become, this specific meal is just not the tastiest you're likely to find. For instance, some of the Job for a Cowboy albums where they went all brutal death are packed with more interesting, catchy riff patterns, and even bands like Carnifex and Whitechapel have been making dramatic improvements to their material, at least in my estimation (like I said, there's a pretty stubborn core audience to this niche which seems adverse to any sort of variation or logical progression).

Yeah, if you're into deathcore for both the breakdowns and musicianship, The Price of Existence is really not a bad place to start. The lyrics are mildly more coherent, and the cover art better, though their logo remained fucking awful. Fortunately, they didn't shitty this up with a bunch of clean radio choruses or any of that Killswitch Engage garbage (approved by soccer moms everywhere), and the fact that this was their first for Nuclear Blast sort of comes with the implication that the production is better. I had no problem with the studio sound for Hate.Malice.Revenge, but this is superior in terms of vocal levels and drums. The addition of the second lead guitarist (Chris Storey) was a wise one, and in fact both guitarists were new here...it was a 60% lineup change with only the rhythm section remaining off the debut. They made some good choices and transformed from the sort of band I could hear just about anywhere I could find a 'core or 'metal' gig, to a potential contender in a West Coast arena that also contained bands like As I Lay Dying and Suicide Silence. There's certainly a sense of 'me too' about this, another bandwagon outfit attempting to capitalize on the success of East Coast commercial metalcore (and The Black Dahlia Murder) by gutting some of its sissy ingredients and incorporating more death metal and gut churning mosh moments...yet that is the worst thing to be said for it (okay, outside of the logo).

Verdict: Indifference [6/10] (before the days of gluttons)