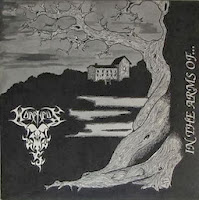 I'm sure I'm not the only person that used the internet to his advantage in the early 'oughts to comb over every obscure Swedish death metal demo and recording that was previously unavailable to him in physical form during the actual 90s...even with the occasional tape trade I was just not able to experience all the stuff in that busy, emergent scene when it was in motion. That said, Morpheus' sole, 1993 full-length Sons of Hypnos was never really high on my radar due to its pretty basic songwriting and dryer production aesthetics...oh, it wasn't all that bad, but a little too 'by the numbers' when there were infinitely better bands coming out of this very same scene. Still, the collectors have likely had some bidding wars over that title in recent times, and the great Temple of Darkness out of Spain has seen fit to reissue the group's original In the Arms of... EP (1991), with the added bonus of the 1990 Obscurity demo, when they were one of several groups known as Exhumed.

Here's the catch: this has all been remixed and remastered, and even as someone with a lukewarm reaction to their later album, I have to admit it sounds quite right. I'm not sure if it was just my copy of Sons of Hypnos that sounded so depth-less and barren, but even some of the same songs here ("Among Others", "The Third Reich 3797 A.C.") sound meatier and more disgustingly loveable. Many would be interested to know that these earlier recordings were recorded at the legendary Sunlight Studio by Thomas Skogsberg, with a ruddier and churning tone. The guitars aren't quite as prominent as they are in, say, Entombed, but they're definitely built upon that same Nihilistic/Dismember aesthetic which draws equally from Floridian death metal tremolo picking, Bolt Thrower-like grooves and a dirty, thrashing underbelly. The riffs are not unanimously inspiring or unique, even for such an early time in the medium, but balanced well enough in a tune like "No Man's Land" that they feel atmospheric and intense, especially in the bridge when they pull off this breakdown that features a nicely winding harmony and some backing synth. I had never heard this tune, nor the more blasting and ugly "Thoughts of Distrust", and I'd have to say they are definitely some of my favorites from In the Arms of..., with ghastly, throaty guttural vocals and a nice snap to the drums.

That said, the more simplistic Obscurity demo is actually the real value here, because you're experiencing some of the most primal death metal available from the Swedish scene in newly refined stereo glory. The guitars here are far more fuzzy and meaty, and the echo effect on the vocals creates this constant feeling that the guy is trapped in some sepulcher in a graveyard and his growls are resonated back and forth across the walls and ceilings. There are again some atmospheric synths in the background, never a bad thing for me with early death metal, and the robust chug of the guitar is completely overbearing to the point that the bass lines just seem like an afterthought...but fuck, I'd take this over about 80% of the retro nostalgia acts peddling the 'authentic' Swedish death metal of yesteryear, and Exhumed was quite plainly a barbaric band of bruisers whose music sounded about as pure as you're going to get, even if to some extent you might think it sounds like some abrasive younger brother to a record like Indecent & Obscene or Clandestine. The drums on this demo sound even better to me than the later EP, and it just reminds me of a time when death metal was so young, energized and important as a statement against thrash and trad metal.

Now, disclosure: I got sent a copy of this to review, but this is well worth coughing up a few bucks for, if for no other reason than to finally have a copy of that demo on CD, with In the Arms of... as a nice bonus. As primitive and perhaps unoriginal as the three songs may be (especially today), they are entirely captivating and quite substantial at around 5-7 minutes each, and you have to wonder why this didn't earn a little more respect. Unfortunately, lyrics are only provided for the In the Arms of... EP, but otherwise it's a nice little package with the original art included for historical reasons. All told, I was quite happy with this little trip down memo...mortuary lane, and look forward to any other rarity demo/reissues this label gets its hands on, if they are treated with this much respect. Obviously, since there is so wide an audience for this Swedish sound (if the promos from new bands I constantly receive are any indicator) that there are enough people to support getting all the original stuff available once more, so let's not rest until the job is done. This is another step along that path.