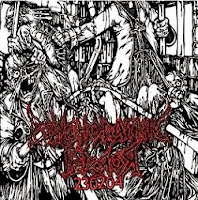 You may or may not know Petri Ilvespakka as a past member of cult Finnish death outfit Depravity, one of the few in that scene NOT to have reformed (yet) in the 21st century. He played bass on their demo material as well as the Silence of the Centuries EP, which has seen a resurgence in popularity along with the internet-borne tide of death metal nostalgia. You might instead be aware of the guy through his by the book black metal vehicle Diaboli, which has produced six full-lengths over the last two decades of existence. Psychopathic Terror is yet another of the guy's projects, used to explore various other forms of extreme metal, running concurrently with the black metal stuff and, like that, a situation where he performs most of the instruments. He's joined here on 230204 (the sophomore album) by longtime Korpiklaani drummer Matti Johansso, who must have relished the opportunity to engage in some no-frills old school stuff; and also, for a few tracks, a lead guitarist, Tony Tieaho, who normally plays in the band Crystalic.

This was the same configuration as the 2006 debut Fucker, a record I haven't heard, but it seems to work out rather well here, each of the guests contributing just enough to mold some character into what might otherwise be a pretty basic excursion into primal Scandinavian death metal of the earlier 90s, with a murderous/horror-themed lyrical slant that also delves into current 'events' when it takes on issues like those of the closer "Pedophile Priest" (later albums are more directly political). I guess the easy reference is Entombed, Unleashed or Dismember, with a truly simple selection of riffs that aren't whatsoever unique, split between dense chugging grooves and a few tremolo picked sequences, all predicated on the notion that the listener is going to tap into the same nostalgic void that Petri himself is occupying. The guitar tone and chord progressions certainly cultivate memories of slower grind, and in fact the more measured grooves here might recall a bit of Bolt Thrower, with Petri's gruff barks taking on Karl Willetts' sense of bleakness, but there is absolutely also a death & roll heart which beats loudly through a number of the D-beat rhythms (as in "Living Death"). Thing is, the composition is not quite so exciting as a Clandestine, Wolverine Blues or Indecent & Obscene. The riffing choices, perhaps a little too baseline to really absorb me, don't ever seek to surprise or invent.

Fortunately, the pummeling production values help to compensate by allowing the guitar tone to churn into your ears as if someone were opening your head with a wine corkscrew, and as primal as these rhythmic configurations are on the surface, they're just solid enough to begin to involve you in the album. Whats more, the leads here, where they appear, are quite excellently written to the point where they add another layer of depth to the entirety of the experience. The downside is that they make me wish they were more frequent here, that Petri himself would implement a lot more melodic chords into the framework of the meaty rhythm patterns. The tone of the guitar naturally smothers Matti's drums to an extent, and I would say Ilvespakka's vocals themselves also fall victim since, while they create a solid, audible throwback to Willetts or L-G Petrov, they just can't compete with those fat, gushing chords. I'd definitely compliment the man on his choice of bass tone, which as you can tell from the intro to "The Art of Killing" is 100% muddied and disgusting, and is certainly felt everywhere, not playing second fiddle quite like Matti's drums which seem complacent to shuffle along below the density of the strings (though he's a great player).

Of course, there are hundreds of bands currently occupying this Swedish throwback death metal niche at the present time, some quite good at it, others largely forgettable. 230204 is far from the head of the class, and from what I've read Psychopathic Terror itself has evolved a little from this sound on the later two albums (which I've also not heard), but it's fairly decent despite its unwillingness to take chances and distinguish itself from the herd. Just going off the leads alone, it seems like the eight tracks here could have used even more dressing and complexity to truly stand out, since the core verse riffs and breakdowns all feel like we've been down their particular roads in the past many times (through the 90s and beyond). But ultimately, fans of low-velocity Euro grind ala slower Rotten Sound, d-beat hardcore acts like Disfear or Trap Them, or comparable death metal acts like Bombs of Hades and Mr. Death who do the 'dirtier' spin on the aesthetics of the Swedish elite of '90-92 will achieve some comforting concussions while banging their heads along to this, and it definitely works as advertised.