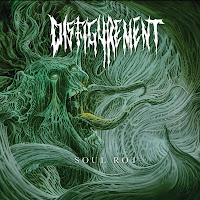 It's never a bad thing when I've listened through the first 3-5 minutes of a new death metal record and can't immediately lump it into one of the prevalent trends of either tech-brutality, cavern-core or Swedophilia. Atlanta's Disfigurement certainly cultivate some pretty popular old school influences from the 90s, but with their EP Soul Rot, they have the luxury of instantly seeming fresher than the majority of what's being churned out of the nostalgia factory 24/7. Nothing but pure death studied from the lexicon of artists like Morbid Angel and Vader, with faster and repulsive rhythms interspersed into roiling, atmospheric grooves and a raw but precise sense of atmosphere that generates an infernal level of energy and enthusiasm that is...to be blunt...infectious.

Nothing out of left field, and nothing extraordinary if you've been around this music the past 20+ years, but I'm reminded of other acts like Horrendous who have managed to take those inspirations and make them feel new again, or rather to make me feel like the mullet-sporting newspaper delivery dork who used to memorize every damn tremolo picked progression on every damn death metal cassette he could acquire at the ripe age of 15. Extra, extra, bleed all about it! Add to that the present day production capabilities and Disfigurement simply shattered my expectations, and maintained a consistent level of competence and quality for the 23 minutes and 5 songs this EP endures. Shrill, atmospheric leads writhe their way through a lattice of intense, churning, molten guitars that flirt with that classic overseas tone of the 90s, but settle for something robust and visceral without reaching that oversaturated level crunch. Drums are loud, proud and never sound particularly falsified or processed like a lot of drummers playing at this level in more technical outfits.

The vocalist is also quite a 'catch', he's got those bellowing Benton/Tucker depth growls that shake and resonate but also a bit of Corpsegrinder gutturality (new word, I swear) and then some raspier passages to develop variation in the lines. Bass is pretty potent; although the lines don't distinguish themselves from the rhythm tracks, you're never unaware of its presence. But ultimately, where the band succeeds the most is in structuring these songs...always leaping full force into some intense new battery, regardless of what tempo they have settled upon...think Domination meets Litany meets Once Upon the Cross and then foster that tryst with a fair ratio of memorable riffing, sporadic fits of extraworldly leads/melodies and then of course the resonance that front man brings to the entire affair. I'm not promising that this is 100% memorable fare, or that the riffs escape derivation often enough to generate a sense of nuance and wonder, but Soul Rot is another reminder that the old school sweatshop of the past 5-10 years is not necessarily played out to its fullest, and that with a little talent and focus on song structure the best could be yet to come...