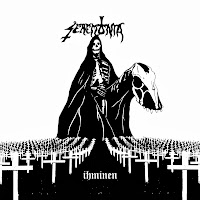 There were quite a number of things conspiring against my enjoyment of Seremonia's sophomore Ihminen ('human' if my poor translation skill haven't failed me yet again). For one, the record is front-ended by a number of exceedingly familiar, bluesy Sabbath-like chord progressions that, regardless of whatever fuzzy spin you'll place o them, do little to inspire me in the 21st century after hearing similar for decades in both popular and underground sludge/stoner rock. Another is that this seemed to be the dozenth female-fronted psychedelic retro doom outfit I'd heard in recent months; not that there's anything right or wrong about this equation, and some are quite good, but my internal 'trend meter' was once again flashing its warning signs. That said, by the time the record ended, I had mutated into a drooling advocate for the way the Finns handle this sound.

Ihminen, in particular the latter half of the album which begins around "Painajaisten Maa", is a haunting and compelling experience which channels prototype 70s doom into a trippy landscape of eerie vocal harmonies, raw drumming and crude, atmospheric rhythm guitars that are occasionally joined with unexpected higher end sequences of more ambient guitars; as in the lengthy bridge of this particular tune. They can convincingly ape that spidery crawl of the original "Black Sabbath" in addition to splaying out groovier, desert rock style rhythms circa Kyuss or their ilk, and thus there's a pretty fair range of material across the 11 tracks. But what will immediately strike most listeners is just how numbingly beautiful the voice of Noora Federley is: soothing and seething simultaneously, with the backing male vox seamlessly integrated as a support device. The fact that all the lyrics are in the group's native Finnish tongue might prove a turn-off to some, but I found this one of the most remarkable components...it's simply not the same enunciation one is accustomed to from other groups in this niche, and that makes it immediately more interesting and unique.

Noora has a unique ability to sound stern, cold and eloquent in equal measures, and it casts this net of sheer nostalgia which peels away the decades to this strange alternate universe where bell bottoms are being shaken to occult rituals and acid tabs grew on trees. Corduroy fields forever! You could almost think of this as a spiritual update to the old 1969 Coven record Witchcraft Destroys Minds & Reaps Souls, only made over with a Blue Cheer/Black Sabbath treatment in the guitars and vocals that are obviously less soulful than what Jinx Dawson was doing. Dubbing this 'cemetery hippy metal' wouldn't be too far off the mark, but don't let any label dissuade you into not checking this out, because it's rather fantastic. I had hinted that a few of the guitar riffs were pretty basic and bland, and that's certainly the case in tunes like "Itsemurhaaja" which lack the capacity to evince surprise or wonder, but as a sum experience, I'd say there's plenty of exploration in the record's depths. Examples include "Vastaus Rukouskiisi" which is like a sepulchre go-go with added, whacked out guitar textures, or "Hallava Hevonen" with its tribal, antiquated Gothic doom and gloom.

Hell, the aforementioned "Painajasten Maa" is one of the scariest tunes I've heard all year with those strange, sawing intro sounds and the vocal patterns over the fuzzy bass tone and dingy guitars...lulling you into a charnel house coma until it suddenly erupts with color and psychedelia through a driving riff seasoned in a bedlam of spooky flutes. The drums and guitars are all splendidly understated and underpolished to create and relay a live-like studio interaction, and though they never tax themselves experimentally like other Finnish bands (Oranssi Pazuzu, Candy Cane, etc), there's just enough here to ultimately graft a layer of freshness onto what are some otherwise conservative riffing choices. I do wish this was distributed a bit more evenly over the record (especially among the first few cuts), but in the end there was absolutely enough bewitchment as you'll find on any Blood Ceremony or Jex Thoth outing, and even with the language barrier I was finding myself completely enthralled over the course of numerous listens. Few other records this year will provide you with as much impetus to light a doobie with the undead and soak in the withering of the world.