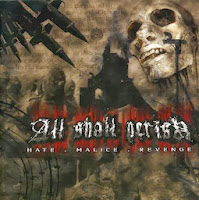 Is there anything more frustrating than an extreme metal record which wastes so little time in dispensing its potential qualities to reveal its true nature: a reductionist, lazy bro-down mosh vehicle? All Shall Perish has long been presented to me (by acquaintances) as one of the most 'legit' acts in the deathcore field, an example of toughguycore backed by some real Oakland street cred, tight musicianship and something I might get into since I have both a soft spot for NYHC and a few of the more musical efforts in this particular niche (like Job for a Cowboy's recent output). So I decided to delve into their catalog, of which I only had a cursory knowledge from a few videos, and thus far I'm turning up blanks folks...this, lamentably, sort of sucks, and what makes it worse is that if I went at it with a paring knife I could probably carve out a 10-15 chunk of decency.

Unlike some of their later stuff I've heard, which seems to thrive more on that In Flames/Black Dahlia Murder axis with the more technical, perky melodic riffing, Hate.Malice.Revenge seems to dwell in a space between a more surgical, brutal death metal influence and the unnecessary neanderthal slog-core that soils it as an experience (at least for me). You've got some fairly apt tremolo picking selections here which range from Carcass to Deicide to Morbid Angel and these are broken up by some of the most banal palm muted chug sequences you've heard since bands like Earth Crisis capitalized on them in the earlier 90s. To the Californians' credit, they do incorporate a lot of slower, dreary melodies which might even belong to the Bolt Thrower camp if weren't based around such basic pit structures, but in general you range from the faster picked tremolo death to the breakdown and that's the majority of what I hear on this, without any real clue on how to incorporate the tempo shifts with any tact or style. The notes match, the shift in pacing is not unappreciated, I just found myself hoping for some nuance or cleverness in how they distributed the blunt punishment. It's kid stuff...with something more mature struggling to break free.

Vocals are incredibly generic here, but it's all too rare among the deathcore crowd that they are anything else? This was before they got the better known Hernan Hermida (who has since moved over to replace Mitch in Suicide Silence), who became synonymous with their sound, but here you've just got a selection of generic 'look, Mom, I can growl too' gutturals and higher pitched, retching snarls. Not awful, but overbearing in that typical American fashion where sounding brutal and oppressive trumps having any character or true distinction to one's performance. You could interchange this guy with almost any kid you pulled off the street and arrive at similar results, whereas death metal was once about having some uniqueness or charisma...can you imagine if a deathcore band boisted a frontman as compelling as a Martin van Drunen, John Tardy or Paul Speckmann? Yes, I know, that's a grand idea, so if you've got some in mind, do point them out, as the vocals always seem such a shortcoming for this subgenre. Gurgle like an indistinct toilet over the pathetic palm mutes: for the win! Fuck off!

Everything just seems so custom-made for moshing on this disc that it seems entirely inconsequential when you're outside of that setting, and that might work out for some records, but here it just doesn't equate to a pleasurable listening experience. Surprisingly, there are few production pitfalls. I like the way Hate.Malice. Revenge actually SOUNDS, just not the choices the band makes in sculpting that sound. Roiling, chuggy guitars that don't dowse themselves in unnecessary effects. Tribal like drumming that lurches along with every groove, and a nice and fat bass tone which at least adds to the mix, if not a lot of interesting notes and fills. The vocals are loud, which is a constant in deathcore and metalcore, but not to the point of distracting away from the chords. Elsewhere, the aesthetics of this debut are fucking pitiful. The 'three harsh words separated by period punctuation' album title has already been done by bands like Revenge and Watchmaker, who are actually good, so that never needed to be revisted. Also can't stand this band's logo...it just reads like any generic House of Pain-era tattoo from the 90s, and I don't even find that acceptable or interesting even when a straight up hardcore band does it...groups like Hatebreed started a nasty trend, methinks.

I'm going to assume All Shall Perish was a pretty young group when this dropped a decade ago, but the lyrics are mediocre in the way most 'heartfelt' hardcore/metalcore emotional stuff was in the early 90s, reading like the scrawls and soul-searching of a 14 year old in his freshman notebook. To be fair, a few of them have that same apocalyptic vibes to them (common in deathcore), but others are about relationships and being betrayed and hurt and how awful that all is, whether in a domestic situation or a girl/boyfriend. Hey dudes, there's plenty of pussy in this world (or dick, if that's your fix), but if you're going to write about how you've been squashed, how about trying some metaphor? Some lasting imagery? Interesting syllabic patterns? If bros could write like that close to a thousand years ago, why can't you? I think bands like Converge or Trap Them really set the standard for all lyrical things 'core, so it's a fraction painful to read the more primitive sentiments...not that primitive is always bad, but if it's not going to be entertaining, it's not enough.

Hate.Malice.Revenge was a pretty unusual release for Amputated Vein since the label focuses almost exclusively on brutal death, but I can see how they might wanna take a chance on this since the style did not immediately create such friction among the diehard goremongers. However, I feel like they might have taken this chance with a better band. Granted, I'm in the minority, and these guys blew up pretty big with their Nuclear Blast deal (which produced a few superior albums that I'll cover later), but I get the impression from Hate.Malice.Revenge that these guys were just the local neighborhood flavor who just had their shit together enough to put on some raging pits at their gigs, and that seems to be the only musical momentum this material is capable of. Brief glimpses of something more engaging throughout, but ultimately a sodden and underwhelming experience beyond balling up your fist and juicin' the testosterone. Dude metal for dudes who wanna hit other dudes repeatedly, but those into music for the MUSIC would be better served with the later All Shall Perish outings.

Posted by autothrall at 6:37 AM