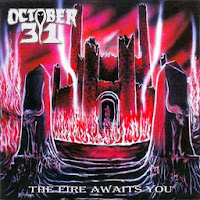 I first ran into October 31 at one of the earlier March Metal Meltdown festivals in Asbury Park, NJ where I was rummaging bins and buying a bunch of vintage stuff, some from King Fowley's Old Metal Records, like the Witch Cross Fit for Fight CD reissue. I distinctly remember being impressed by the band's great name and also the cover art to The Fire Awaits You, and when I realized Fowley was directly involved in this, I picked up both the debut and the second album Meet Thy Maker instantly. Lo and behold, October 31 is indeed what we might dub a 'poor man's Deceased', with a comparable fondness for classic horror lyrical themes and obscure 80s influences. I certainly feel that a fan of one band might naturally appreciate the other, with the caveat that The Fire Awaits You is inspired more directly by traditional/speed metal and leaves out the primitive death and thrash trappings that characterized Deceased's evolution over the decades.

Essentially October 31 creates raw, blue collar epic heavy metal from a host of European, American and more specifically NWOBHM influences, with Fowley's down to earth, dirty vocals at the fore and a slew of sparser atmospheric nuances that lend it more character than it likely deserves. Brian 'Hellstorm' Williams' guitars are slightly muddy, unpolished and unapologetic and I tended to feel that, at least on this debut, many of the chord patterns felt a bit familiar and predictable, but that also was probably the point. There are some exceptions, like "Vindication" which was a little unusual, and I absolutely loved the mellow and moody acoustics that introduce "Lost City", with Fowley providing some ambient keyboard support; but in general this is all very workmanlike and expected speed/heavy metal without an immense measure of creativity. And normally I wouldn't have much of an issue with that, only the atmospheric and unusual choices made here unanimously stand out as the record's most interesting. It doesn't deliver the bold choruses and savage edge that a lot of its 80s forebears thrived off, the gloominess and lo-fi production coming across quite a lot like earlier Deceased.

I'd also say this was one of King's less exceptional vocal performances...you'll instantly recognize the guy for that natural grit, but when he attempts to hit a more touching, melodic phrase as in "A Million Goodbyes" or the title track, he seems slightly off-key or straining to really deliver what the song needs. This is not a man under any illusions as to his range on the microphone, but at least with most of the Deceased he sounds ruthless, aggressive or just plain ornery...here, where the music is less busy and his voice has more space to resonate, his lines do tend to come up short. Not to the point where it's a deal-breaker, because The Fire Awaits You sets its nostalgic mood early on in "The Warlock" and never shakes you from it, but the guy sounds so much better elsewhere, even on Meet Thy Maker (a more powerful and memorable experience overall). The result is that the October 31 debut often seems like a pet project in which they weren't going to go out of their way to do many extra takes, or to establish a better guitar tone than this, instead choosing to rely on its visceral rawness as a strength when it's just not always the case.

His drumming does sound organic and quite fantastic here, especially the kicks and fills that just plow through the mix, but wherein Deceased his pummeling as matched by the guitars, this stuff is much simpler so he is often threatening to trample it all. Again, not a major issue but it makes you wish there was just a little more 'oomph' in many of the rhythm guitar progressions. The bass is simple and audible but not very interesting, so the songs really rely on chorus hooks and atmospheric embellishments to succeed, and the results there are uneven, if not completely inconsistent. As for the horror influences, they clearly revolve around older films the historical haze surrounding witches, warlocks, Hell on Earth scenarios or Halloween itself (in the title track). There's a cover of Witchkiller's "Day of the Saxons" which honors the original but does nothing compelling beyond just hearing Fowley's voice over the Canadian, Metal Blade Records alumni's obscurity. Ironically, the Saxon cover on the second album ("Power & The Glory") is superior...

But then, Meet Thy Maker (1999), or even the Visions of the End EP (1998) were clear steps up in terms of songwriting strength, emotional power and musicianship, though neither was a masterpiece. The Fire Awaits You has the makings of a good album, and even reaches that level in numerous places, but I felt a little more underwhelmed than I expected to after enjoying Fearless Undead Machines, which for comparison was released in the same year. What this album possesses in variation and attitude, it simply lacks in staying power. It's never played for camp, but that actually makes it a little less fun, even though King does his usually good job with the lyrics. I've long been crossing my fingers that October 31 would finally do some justice to their namesake, and release a thorough throwback 80s horror metal effort, but considering that there last full-length No Survivors (2005) was still fairly middling, I don't have a lot of confidence that their wonderful, cartoonish logo with get its due. In the end, Fearless Undead Machines and Supernatural Addiction give you all you could want out of this in spades, since they each have a metric ton of trad/speed metal influence, melody, and good old chops.