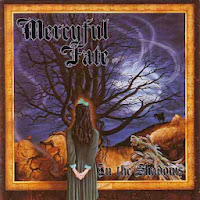 In the Shadows could be considered a righteous 'comeback' record long before metal comeback records became a thing, as the majority of 80s acts hit their midlife crises and decided to give it that last college try. King Diamond and crew weren't leaping back into some trending rebirth of aesthetics in 1993...traditional heavy metal, especially here in the States, was a veritable dead zone. Beyond the touring stability of a few dozen acts, grunge and death metal had all but taken over, and groove metal reaching terminal velocity thanks to Pantera's success. That a defunct Danish staple like Mercyful Fate could return with such a fantastic record as this is a testament to how great they were in the first place, but color me unsurprised...

...because for about 15 years, Kim Bendix Petersen never once let me down on a single full-length. In fact, beginning with Melissa and Don't Break the Oath, up until the time someone lost their marbles and decided to release that riffless, idealess, uninspired creative nadir The Graveyard, King Diamond/Mercyful Fate probably laid claim to the greatest streak in all metal music. Ten full-lengths of quality in that '83-95 era, ranging from just 'great' to utter perfection, and yes I'm including Time and The Spider's Lullabye in that total. So when the King decided to take a short respite from the constant touring and brilliance of his solo group and reunite with his alma mater, with less than a decade since Don't Break the Oath, I had little to no trepidation about the ability of these men to deliver, and not only were my expectations met, but in some departments exceeded. Don't Breath the Oath is, and will likely remain my favorite of the Mercyful Fate records, but without question, I find In the Shadows to be their most creative. The sophomore is the first I'll turn to when nostalgia summons, but this felt far more unique to me in 1993 than Oath did in 1984.

A statement that would likely generate some dissent among various acquaintances who have argued with me that this simply sounds like another King Diamond solo record, but I have to disagree. Apart from the fact the two groups are inexorably linked due to Kim's falsetto shrieking and thematic similarities, I have long found the playing of the Shermann/Denner configuration quite different than Andy LaRocque. These guys had a more workmanlike unity to their playing, where Andy's more like a one man exhibition falling somewhere between Randy Rhoads and Yngwie Malmsteen, regardless of whoever is backing him up. Don't get me wrong, I enjoy all three of these legends (and Mike Wead to boot), and they could easily cover for one another if the need arose; but while there was obviously some influence from the old Fate carried forth into the King Diamond legacy and then back again, it's definitely the rhythm guitars that make all the difference discerning between the two...that and the fact that this particular disc reached a new benchmark in production quality that even renders masterworks like Abigail and The Eye somewhat unwashed (though I wouldn't trade the atmosphere inherent to those recordings for the world).

But In the Shadows has an atmosphere of its own. The record is loaded with these incredibly interesting, eerie and slower lurching riff progressions that are remarkably well-conceived, the sort of planning you're just too rarely going to find in a younger or 'throwback' band more concerned with copying pre-existing patterns of chords and mutes and then juggling them around like lottery balls. Granted, these unique twists did exist on the first two Fate outings, but to a lesser extent, not as fully fleshed out. Fear not: there are still numerous bursts of intense, melodic speed/heavy metal here as found in "Egypt", the spiritual stepchild to "Curse of the Pharaohs". Hank and Michael can certainly eviscerate a fretboard, but without exception, it's the moodier and measured picking patterns on this album that truly excel and stand to memory. By 1993, when many groups had dissembled or were stylistically shifting towards the status quo, Mercyful Fate was polishing and innovating its own brand into crystalline clarity and ear-carving catchiness. And it's not simply limited to the rhythms...the leads and melodies here are spectral, pristine, and just as important as their surroundings, and you also feel a tasteful amount of blues and 70s hard rock inspiration over the entire album.

What's more, the musical decisions here really seem to fit the individual tales of specters, seasons, shadows and other introspective gloom that dominate the lyrics. Unlike King Diamond records, which are more or less metallic-orchestrated novellas following an internal narrative, these read like short stories, though often also from the first-person perspective. Petersen shines throughout, engaging in quite a lot of his mid range to balance off against the shrieks and grooves in cuts like "The Bell Witch" and "The Old Oak", with a few of those blissful, ghostly lower falsettos emphasized with an additional whisper track. By this point, the King might be considered a master composer by any standard, so it's not unexpected that he can so carefully lay down each line, an author aware of every phrase before he dips his pen in the inkwell. The synths strewn across the songs are generally tasteful and supportive, occasionally reminding me of their use on The Eye, especially in the instrumental "Room of Golden Air" which honestly is the one tune that sounds like a leftover from that period. Acoustics are likewise sparse, used only in brief segments (like the intro to "Egypt"), it's ultimately those uncanny and morbid mid-paced rhythm guitars that drive so much of this experience.

Morten Nielsen's beats, while simplistic and rock-oriented rather than intense, have this great mix with just the right amount of resonant to the snares and kicks. No idea why they were credited to Snowy Shaw, but I'd just assume that was an error on the part of the label/graphics team. The one component lacking for me here is the bass playing, which seems really subdued, and not one of Timi Hansen's finer performances alongside the King. I mean, this is a very airy, eloquent mix, like a cold moonlit night with only a few clouds; so a booming or buzzy bass tone might prove distracting, but the volume is such that it only hovers below the rhythm guitar and I don't pick out a lot of interesting or inspired grooves and fills, with a few exceptions like "A Gruesome Time" where the instrument shines a little more than usual. Otherwise, In the Shadows just sounds so timeless and tremendous that I would hardly change a bloody note. Even the 1993 rendition of "Return of the Vampire" sounds dramatically improved thanks to its production...would've been better as a pure bonus track, since it seems mildly redundant, yet in keeping with the various 'sequels' on the album like "Is That You, Melissa" or "Egypt", it makes some sense and is thankfully tacked on as the finale.

Mercyful Fate had such a classy comeback here that it's hard to imagine any long time fans not enjoying it, beyond those easily marginalized louts who seem to joy in clinging to some proscribed period of a band's work and then automatically rejecting everything exterior to that phase. In the Shadows is intelligent, it's intricate, and it's thoroughly innovative despite such a strict adherence to the band's lyrical aesthetics and traditional 80s style. With the exception of "Room of Golden Air" and "Return of the Vampire", it's quite coherent without any of the tunes sounding quite the same, and it's even got that captivating cover image which broaches a number of the album's subjects. Perhaps most impressive, at least to me personally, is that this is one of those rarities which seems to improve with age, despite its minor flaws. I enjoyed this more in 2003 than 1993, and now in 2013 that trend continues, to be reflected in my rating. I simply can't imagine spending a Halloween without throwing this on the deck at least once. I know, the same could be said for anything King put out in the 80s with either vehicle, most of which is mandatory, but In the Shadows is absolutely one of those uncommon gems of that earlier 90s period not to involve death or black metal. If I find myself in the mood for hellfire, leather and burning witch-skin, Don't Break the Oath would still be the defacto Fate disc due to its ferocity and importance, but this is such a great record to kick back to on an autumn New England night with a seasonal brew, to just watch the leaves drift or wallow in the slowly encroaching cold.