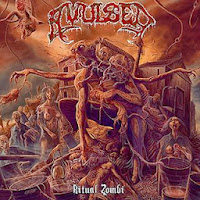 Avulsed is about as synonymous to Spanish death metal at this point as my Keurig coffee maker is to breakfast, but when you break down the band's trajectory they've been all over the place. Taking a 'tour' of the death metal genre, from the humble 90s brutality of their first proper 90s full length Eminence in Putrescence, which was itself rather old school in nature with a clear lineage to the first few Death records...to outings like Stabwound Orgasm and Yearning for the Grotesque which took on slightly more 'gore drenched' characteristics that one might relate to US acts Cannibal Corpse, Exhumed or Impaled. They even failed at a techno-death metal remix thing in Cybervoid. But thankfully, through most of their career, they've focused on baser songwriting aesthetics like simplified riffs and grooves, sparse but well-formed melodies, and I've always had the impression that they've just never properly shaken off their roots to surrender to the ranks of brutechnicality that became ever more prominent upon the turn of the century. At its core, Avulsed has always characterized the 'retro' death metal theme, before it WAS retro, even when it seemed, from their often explicit cover images, that they were escaping that. And speaking of cover art, Ritual Zombi, their 6th full-length, absolutely slays...

By and large, so does the music, to the extent that I might safely cite this as one of their strongest efforts to date. I'm a little biased, being a sucker for veteran Dave Rotten's vocal performance on the two Putrevore records he released with Rogga Johansson, and his decrepit, rumbling, nihilistic growls remain an immense feature here, but in the riffing department this is a balanced and entertaining affair which runs the gamut from late 80s death/thrash picking progressions redolent of Scream Bloody Gore (ignoring even the cover of "Zombie Ritual" itself), to Carcass's Heartwork, to traces of melodic Swedish influences like a few nods to Slaughter of the Soul-era At the Gates, and ending off with some sheer blasting brickwork brutality like the intro to "Zompiro", one of my favorites here. Pacing and riff construction is well enough varied among the 10 originals, and the guitar-driven intro and outro pieces that envelope the album work well to give it that 'overall package' feel that reminds you that you're listening to an album and not a bunch of .mp3 files. I'd also mention the songwriting exhibits an astute lack of overkill, with zero overt technicality or showing off, just a throwback sense of extremity which, had it arrived in that precious 1991-95 period, would have probably proven an undisputed classic...today, not so much, it's just a fun excursion through the annals of undead flesh and quite apparently doesn't take itself so seriously. An homage to the saturated zombie culture.

I've already mentioned Rotten, who gurgles like a human sewer spewing forth flesh-eating plasma, but other highlights are the guitar tone and drumming. They've got this cloying, filthy, ripping presence to the rhythm guitars which seems somewhat Sunlight in origin, but also resembles the classic grind grime found on an effort like Repulsion's Horrified. When they brush out some leads or melodies, with a cleaner tone and some mild effects, there is a great contrast which really transports the listener back to the classics. Oskar Bravo is a positive find for the band, the sole new member here, having played on a bunch of underground stuff I've never heard, and he delivers a lot of organic fills standing out in the mix. The kick drums seem slightly more mechanical but the toms and snare are nearly as prominent as Dave's guttural and the rhythm crunch. I did not pick up a lot of bass guitar, apart from where it's alone (the opening of "...Was Not My Blood"); whether because its being performed with a timbre that is simply absorbed the rhythm guitar or its just not loud enough, but the punch of the guitar riffing is enough to establish a proper low end on my speakers and it's not entirely absent. The distortion is actually a little less buzzing than on the previous record Nullo (The Pleasure of Self-Mutilation), and in fact Ritual Zombi seems not so much brash or in your face as several of their prior offerings, but the songwriting more than compensates.

Ultimately, if you're not entirely jaded on the shambling corpses, which many justifiable are by this point, this is a great lead-in for your Walking Dead viewing parties, and just a pretty fun death metal record to boot. Not the best I've heard this year by a longshot, but the attractive artwork is certainly not sold down the river of viscera by its musical component, and with this and Putrevore it seems like Dave is undergoing some Rotten Renaissance, releasing some of the strongest work since he started this all in 1991. Riff patterns and ideas aren't exactly unique to Avulsed, and they were never a band that was able to make much of a name for itself with so much else making waves internationally, but to be honest I can't think of a single release (out of their full-length albums) which wouldn't be worth spinning this Halloween season, and there's a profound 'music first' mentality here that eschews goresoaked, unending intensity for balance; otherwise they might not have included the classical guitar interlude "Elegy of the Rotting". The cover of "Zombie Ritual" seems a bit too safe a choice, and it's not likely I'll be listening to this with any frequency in six months, yet it's surely feast-worthy for all brain-flesh connoisseurs, and a raunchy, Romero-esque stimulant for the dead nerve endings.