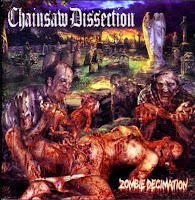 I've only run into a few of Bob Egler's albums in the decade since he started churning them out so systematically, and my reaction has rarely been one of positivity, but despite that, I have to say I maintain a very healthy respect for his perseverance. After all, Egler (aka Bob Macabre) is an undisputed champion of extremity at its raunchiest. He's doing what he wants, consistently, with a level of proliferation that puts even death metal pundits like Rogga Johansson and Elektrokutioner to shame, and I admire the ability of one individual to essentially create an entire musical scene out of himself. Granted, most of Bob's projects tend to come off as aesthetic doppelgangers of his various influences...you'll only find variation and divergence in that he has quite a number of said influences, ranging from dirty old school black metal to filthy goregrind, brutal 90s death metal and other particular epochs on the nastier end of the spectrum. But still, even though I readily admit I don't care for about 90% of what I've heard of his stuff, this man is no hack. He cares about what he's doing, and he's practically an institution in American metal, even if that institution is a mental asylum with a severely limited audience.

Among the (I'm guessing) hundred plus efforts he's released, in dozens of projects, Chainsaw Dissection is his 'baby'. The most prolific of the bunch, and the one he's most commonly recognized for, with Psychotic Homicidal Dismemberment and Satanic Impalement taking the silver and bronze. He's put out at least 18 full-lengths for this band, not to mention various other splits and demos, and they run the gamut from completely amateurish and unhinged to borderline professional in terms of production and presentation. Just out of sheer practice and willpower, across his many musical personas, the guy has developed as a musician and lyricist, but never to the extent that he forsakes the old school intentions or cult horror/exploitation films that so inspired him. Zombie Decimation is the second in this unending sequence of aural abominations, the first of EIGHT full-lengths he issued in 2005, and it boasts one of the better looking cover images in his entire discography; a savage and misogynistic masterpiece of gore courtesy of the illustrious vocalist/artist Mike Hrubovcak (Divine Rapture, Vile, Monstrosity, etc). Not at all comfortable for the squeamish, the appearance of the Chainsaw Dissection sophomore gives us an honest estimation of how it's going to sound, only I have a hard time discerning just which is uglier...the music, or the undead gruesome feast.

That's not to imply that 'ugliness' is a positive in this disc's favor, but its brutality is never in question. The most obvious way to describe Zombie Decimation would be as a poor man's Mortician. Yes, I realize some people would use that very cliche to define Will Rahmer's vehicle itself, as a 'poor man's substitute for death metal', but I do not share the sentiment for that particular New York establishment, and in fact enjoy quite a number of their records for what they are: utter approximations of morbid horror encased in what must be the most nihilistic wall of goregrinding flesh possible. Guitars that sound like lubricated chainsaws almost impossible to decipher as they carve into the innards of convention. Broad, apocryphal gutturals that exhibit less remorse than the most distant and inhuman serial killers. Mechanical beats programmed at a level of extremity that can rival the most intense human players, even though they might lack some of that organic variation that comes with a living being and his choice in fills and distribution of striking energy. But there are actually a number of differences on this album that divide Egler from Rahmer and Beaujard. The first is that where Mortician is heavily driven by the intestine-rupturing bass-lines, this focuses more on the bludgeoning fiber of the downtuned, muddy rhythm guitars which feel like gallstones being expunged from some diseased bladder.

This leads to the other disparity: Mortician, whether you love them or hate them, have a lot of depth to their sound, provided by anything from the movie samples to the contrast between Will's bass lines and the drums. They've got pretty good production standards for music so obtuse and obscene, but Zombie Decimation is sadly not cut from that same cerecloth. It's more like a Mortician demo with the bass turned down (or off), and little ability to create that same, enveloping atmosphere. Not that Bob's influences offer a great degree of variation in their own songwriting, but here in Chainsaw Dissection it's pretty difficult to distinguish much of the track list from one another, and with 15 tunes and 50 minutes of material, you can imagine the monotony sets in before long. To be fair, there are tracks centered around the slower, Realm of Chaos-like chugging sequences ("Fiend" is an example) you find in a lot of goregrind, and others that really hone in on the blast, beats and a juicier pattern of distraught chords, but the songs are pretty dry on ideas. In fact, there were numerous cases here where I felt like just one evil ass screaming melody or lead would have really intensified the experience, or some better fills, or a bass groove...but it's all too straightforward and dry.

As such, the music really lacks the substance and depth to let its lyrical inspiration rise to the fore. It works only on a purely visceral level, without even the droves of samples used to play upon the listener's moral fiber and cultivate that 'icky' response which later transforms into entertainment. Basically, Zombie Decimation devolves into a mental picture of some elephantine, psychotic cannibal beating a sack with some living victim inside against the nearest wall, over and over without any variation or interesting turns of events.You're to get at most 3-4 minor riffing/drumming variations over the course of a 3-4 minute track, and it's just not enough to maintain my interest, not even close. The drums are soulless droids incapable of diverging from their prime functions. I've definitely got my sick side, and I enjoy a lot of metal so brutal that most of my friends and family can barely comprehend it as music and not construction equipment, but Zombie Decimation seems to play to the negative stereotypes of the style, and not in a positive way. 50+ minutes of disposable sameness that feel like a substantial heap of corpses being ground into fertilizer. Retch-worthy to start, but it rapidly becomes too tedious and commonplace, like a boring day on the job...if that was, like...your job. Corpsegrinding. Probably beats McDonald's, but doesn't make for a great soundtrack when you've got an hour to kill.

Ultimately, though it's the last thing you might suspect when looking at the cover, Zombie Decimation fails because it's simply too damn 'safe'. Establishes a formula, and never deviates from it. There can't be any 'highlights', because all the songs more or less are the same, so it would be 'all or nothing'. Nothing. Fuck, I wouldn't have minded an armpit-farting orchestra, a zombie orgasm, a ukelele or kazoo to help break this up. Anything. Blast, drudge, blast, drudge. Even Bob's vocals, as gut-drenched and gut-borne as they are, don't grace us with any surprises...not even the growl/snarl dichotomy so favored in the usual brutal death/grindcore circles. I doubt the guy had any delusion that he was reinventing or innovating in the field, but Chainsaw Dissection is so fucking monotonous on this outing that it devolves from 'underwhelming' status to outright futile and frustrating. I am glad that there are sick fucks like Bob Macabre making music, as much of it as they can muster. All the power to him, but just because you drag me over to a blood bucket doesn't mean I'm going to tear my shirt off, dump it all over myself and run lunatic. You've also got to put the knife in my hand, and implant the psychotic motivation, subliminal or otherwise. Zombie Decimation is more like an undead typewriter with a stuck key thumping over and over on the same flesh. In sounding so sick, it really isn't... Egler can do better.