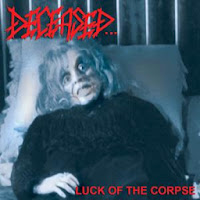 Luck of the Corpse is a textbook example of a grave-blossom not yet in gruesome bloom, a record that functioned only as a crude forebear for its superior successors. Yet there are particular charms to it that I always felt were difficult to deny, despite the dearth of strong riffing progressions and melodies that characterized their true 'breakthrough' period that is unquestionably Fearless Undead Machines and its followup/refinement Supernatural Addiction. To be frank, there's not really a Deceased record I dislike. They've inevitably transformed into one of the most unique and consistent voices in American metal, period, and certainly one of the greatest bands on Earth that I'd dub 'horror metal', since their generally excellent music is accompanied by a lyrical wealth drawn from cult, camp or classic horror that King Fowley and crew seem to have a genuine fascination for. They were doing this long before most other death metal outfits, since the mid-80s, vomited forth from that same filthy mindset that produced Possessed, Blood Feast, Indestroy and their ilk, only Deceased were headed in a more distinctly 'death' direction which the adoption of King's full-bore growls, a technique fans of the band's later material might not be too familiar or comfortable with...

Because, let's face it, while Fowley is an adequate grunter and you can already perceive his natural tone in each line, the vocals of Luck of the Corpse were not nearly so charismatic and unique as they'd become on the later material, where he'd dial back on the guttural delivery and commit to his raw, haunting style which, without being overly melodic, seems a better fit to the band's amalgamation of slasher, paranormal and creature-feature themes. The debut is partly held back by this, because it's naturally just not so dramatic or interesting, but then, that's all-around what separates this from the Virginians' stable of great works. I would also point out the riffing for fault, which was often direly predictable even by 1991 standards. A mishmash of pretty average speed and thrash metal structures imbued with an occasional burst of more open punk or grind intensity. With the exception of a few tremolo riff patterns and the vocals, few would probably even consider this a proper 'death metal' album. The lion's share of rhythm guitars really serve to make the album's melodic exceptions stand out, where on later records both areas were equally strong and nary a track will pass without some delicious riff that you've got to constantly replay in your mind or on your stereo. Here, it seems two uninteresting riffs spit past you for every one that sticks, and so personally Luck of the Corpse becomes more an album to revisit more for its lyrics, atmosphere and nostalgia than for digging up the band's most memorable fare.

That said, I absolutely FUCKING LOVE the production on this disc. In fact, I find it superior to either the 13 Frightened Souls EP (which had better songs) or the grainier Blueprints for Madness sophomore (which also had better songs). A great, gritty guitar tone which is worthy of some of the edgier underground thrash of the decade, but still somehow bright enough to shine on the higher pitch riffing, like those creepy little melodies that poke through the savagery of "Psychedelic Warriors", or the more harried and intense flurries of notes that comprise the Megadeth-like athleticism of "Decrepit Coma". King's drumming seems a little ramshackle amidst all the constant tempo changes here, because Luck of the Corpse is nothing if not a dynamic volley of thrash/speed/punk, but the actual mix of the drums has just the right amount of volume and reverb that makes me feel like I'm out at some live gig. Only complaints there would be that some of the snare cracks seem a little loud, and some of the fills feel stilted and half-formed. I also really love the cruddy sewer-dweller presence of the bass guitar, a C.H.U.D. in audio flesh, making it pretty clear that this was also going to be an INSTRUMENT in Deceased and not just lost in translation like on so many early thrash or death metal records. He does often ape the guitar line a little closely, but is given some breaks of his own and tosses in some sporadic and sturdy tremolo picking sequences of his own and fills, which make a tune like "Experimenting with Failure" so wild (a favorite here).

As a whole, even with a lot of the riffs not being individually anything to write home about, I'm surprised just how much Luck of the Corpse seems to stand up to time. It's certainly not modern or polished sounding, but I'd be very happy to get a new record today from an underground band that had this sense of passionate nostalgia about it. It's perhaps the skimpiest selection of great Deceased songs on any of their full-length offerings, but at a conceptual level the group was already intelligent, lyrically interesting. The difference in riffing style between this and, say Obituary...or Suffocation...or Cannibal Corpse really sealed the deal in distinguishing the Virginians' trajectory, but I was immediately smitten most by the manic, excitable lyrics that often feel more like a mad scientist monologue from some old black & white horror flick at the drive in. In his mind, King was already wearing the lab coat, already dissecting the animated cadaver to see what made it 'tick', and it lends a credible charm to the debut even if his vocal style had yet to really leave an impression. Some would probably argue that Luck of the Corpse is the band's one TRUE death metal disc, but I prefer to think of Deceased as always simply doing its own thing, adding its own voice to the choir and never so intent on limiting or labeling itself. This may not be so multidimensional as its progeny, and a lot of riffs pretty familiar, but it was undoubtedly one of the most 'stylish' releases on the early Relapse roster, and is still worth an occasional spin if you can avert yourself from the better albums to follow.