Howling - Tear the Screams from Your Throat (2013) 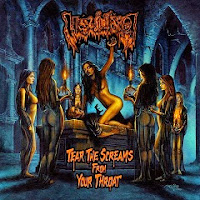 Purportedly NOT the official sophomore album for Razorback's latest house band Howling, but more of a mini-album/EP, Tear the Screams from Your Throat is nonetheless a comparable experience to the debut. A 30-minute excursion into the band's favorite, chilling themes/scenes of classic horror films & stories, all wrapped up in another eye-popping, colorful cover, this time from Mario Lopez. That's right, everyone's favorite reality TV host, aka A.C. Slater from Saved by the Bell is a closet comic book/metal album artist of some talent. Who knew? Of course I'm kidding, and this Mario is probably tired of hearing that, but I'll tell you what I DO NOT grow tired of hearing: this Howling record, which addresses the issues of the first and quite easily surpasses it.

Disclosure: there might be a bit of a bias here, because one of the features that attracted me to this record, is that they've included a cover of Fastway's "Stand Up", from the Trick or Treat soundtrack, which I enjoy for various reasons, not the least of which are nostalgic. That Tony, Vanessa and Wayne even know, much less care about this music proves to me they are persons of good taste, and the cover surprised me because Nocera uses a clean, nasally vocal style, slightly strained but reminiscent of Girlschool or The Runaways. Here I was expecting here worm-retching growls over a classic 80s hard rock tune, and bam, a complete surprise. Overall, a decent rendition of the original despite the lack of taking many liberties. But Tear the Screams from Your Throat obviously can't stand on this tribute alone...the originals are just as entertaining, and what's more they carry a far more balanced mix of instrumentation than A Beast Conceived. The style is still heavily driven by traditional heavy metal harmonies and thrash riffing sequences, often verging on a 'melo death' treatment, with the 'death' component primarily attributed to Vanessa's sustained growls, which are themselves better balanced against the music here. Damn, does she beast out on this thing, like the sustained growl in "Beyond the Fog Shrouded Seas" which brought back memories of Craig Pillard.

This shit is pretty catchy, like popping candy in your ears from your Halloween bag. At the risk of alienating some vest-metal 'elite' listeners who fucking hate the stuff, I picked up a lot of vibes of 90s Swedish death metal like Slaughter of the Soul or The Jester Race, the former for the bite of the guitar tone and the latter for the constant waves of jubilant harmony that contrast Nocera's noxious guttural lyricisms. Surely I heard a few hints of such on the debut, but here it's a lot more evident, like a poor man's Jester Race birthed in a college film lab where reels of old horror flicks from the 60s-80s are in constant rotation. There are still some surges of more brutal thrashing momentum blended into Tony P's glimmering guitars, and surprisingly they have maintained the utter rawness of the debut, only with the levels so much better managed that it all blends together. The only quip there might be that Elektrokutioner's kicks and snares feel a little flimsy and take a back seat to the guitars, but hell even the bass lines are better felt. Not incredibly loud, but they pull out a few little fills and deviations from the melodies that offer their own atmosphere...unlike the debut.

Plenty enough variation, too. Tear the Screams... doesn't really speed up, but that's never been what Howling are about (to this point), so the range is between slower, controlled thrash/heavy metal passages and mid-paced romps that up the ante. It's not exactly the sort of dissonance and brooding songwriting you often expect to accompany horror themes, which is almost always preferable, but it works anyway with the lyrical matter since it's just got this 15-20 year old feel about it, the melodies conferring tragedy while Vanessa handles the lion's share of brutality via her throat alone. I'd fall short of dubbing this a 'great' release, because in many cases you'll feel like you've heard the melodies or rhythm riffs before. I don't think the band has yet reached the level it is clearly advancing towards, but the fact remains that in a matter of months they have already come this far...so there is some cause for excitement when they put out a proper sophomore. Still, it's a nice treat in time for Halloween, and looks and reads like it should: a nostalgia trip into some partially unexpected territory. A great cover, and a great 'cover' to boot.