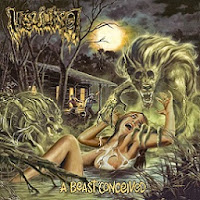 Howling is the latest collaboration between growl-mistress Vanessa Nocera and skinbeater Wayne 'Elektrokutioner' Sarantopoulous, who have worked together in Wooden Stake and Scaremaker, a number of classic (or camp) horror-themed acts that fit snugly into that extended Razorback Records family. Can't say I'm really a fan of either of those projects, since Vanessa is far better in Skeletal Spectre and obviously Wayne kicks ass in a number of other bands (Decrepitaph, Festered and Father Befouled), but just looking at the excellent Justin Osbourn cover artwork and realizing who was involved, I won't lie...A Beast Conceived had me excited, and not just because of the overt titillation. I mean the ingredients are all here: attractive packaging, a great choice of band name (the first flick still rocks), a mutual admiration for cult creepshows, a hybrid of old school death metal, 80s thrash and traditional metal elements, and the right label for it all to come together.

What went wrong? Well, nothing...terribly. I think A Beast Conceived suffers a little from the possibility that its members' attention spans might be divided between too many projects. My number one gripe is in the production, particularly guitars which have a little too boxy and crunchy a tone, which really takes away from the bass end of much of the recording and struggles to compete with Nocera's gruesome gutturals and snarls. It does appear that the whole thing was intended to have a raw and 'live' effect, especially the drumming and the rhythm guitar tone, which I normally wouldn't have a problem with. But I actually feel like some of the riffs here were good enough to have deserved a little more polish and attention. In fact, the first 5-6 minutes of the record were intriguing indeed...an obvious wolf howl ceding to some great dual harmonies and then a solid, slower paced clinical thrash sequence which Vanessa just slobbers on with those disgusting growls. I find there are glimmers of hope and brilliance throughout, largely thanks to the choices of guitarist Tony P. (who has worked with Elektrokutioner in Beyond Hell, another heavily guitar-driven project). It's interesting how he stirs up a volatile concoction of ugly, dirty Teutonic thrash-thrust with a sense for old British melody (like the bridge of "Savage Psychosis"), a handful of archaic chugging proto-death metal riffs and even a few Sabbath-ian doom structures.

Patrick Bruss of Crypticus mixed and mastered this, and I'm not sure how much he was even given to work with, but the tones seem a little too primitive and half-formed. The result is that some of the instrumental interaction feels cluttered and sloppy, especially between the drums and guitars. Unless the bass is performed by itself (like the intro to "Savage Psychosis"), it really tends to disappear because the lines are boring and feel like an afterthought more than an essential ingredient. Fortunately, Tony P has written some killer fuckin' guitar riffs here, like the intro to "Museum of Telepathic Madness" which reminds me of vintage Megadeth, or "From Spectral Mirrors" which reminded me of an uglier, cruder 80s Metallica. Nothing really original, perhaps, but the guitar progressions flow rather well together, took a little effort and imagination, and help prevent the production gaffes from taking over the experience. I think Vanessa's vocals could have been dialed back a little since they often seem like they're going to blow up the microphone, but in general she's her usual, brutal self...just don't expect anything unique or excessively charismatic, because all the rasps and roars are akin to those you've heard thousands of times from other bands...only it once again feels 'live'.

In the end, A Beast Conceived is a bit of a letdown, since I've been long hoping for Razorback to release some new gems on the level of those they put out earlier in the 21st century...like the older Ghoul efforts, Claws, Vacant Coffin, Revolting, Hooded Menace, etc. This instead seems a little below par, not only for the label, but for the members involved, who all have written and performed better material. But I think as a 'control group' the album shows some potential. Not all the riffs are great, but enough are entertaining. The lyrics channel classic horror concepts much in the vein of Deceased. And, most of all, you're certainly not going to find many others as committed as these individuals to celebrating the horror genre in metal music... for better or worse.