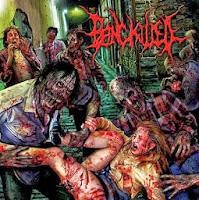 As I was picking through some gory stuff to cover this October, I admit to selecting Massacre of the Living because the cover was so similar to Chainsaw Dissection's Zombie Decimation, another disc I wanted to revisit. Sure enough, this is also a Mike Hrubovcak piece, and nearly the same, with a female victim about to be overcome by ravenous undead; only here she's got most of her clothes on (sans the nip slippage) and she's been taken in an alley as opposed to a graveyard. Admittedly, I found this a bit more colorful than Zombie Decimation, and wouldn't you know it...so is the music itself. Though it's marginally comparable in style, thanks to the drum programming, this benefits from a cleaner and more clinical production sensibility that helps the riffs shine through.

And there ARE riffs, aplenty, over the 20 tracks in 23 minutes. Some of them are even pretty goddamn good, if not unique. I've seen several comparisons of this to Mortician, but I have to think those are based solely on the lyrical subject matter, use of drum machine, samples and the brief length of the average track. In reality, Being Killed is quite different. The songwriting is centered heavily on the rhythm guitars and doesn't use the oozing bass line technique (circa Will Rahmer). Also, the riffs here aren't nearly as barbaric...in place of the bludgeoning, drudging dichotomy you find in the New Yorkers, these Californians are more meticulous in how they construct guitar progressions. Not incredibly technical, no, but the punchy palm-muting and use of tremolo riffs is far more redolent of Cannibal Corpse, Suffocation and Deicide than the deathgrinding side of the equation. In fact, the only 'grind' aesthetic here is the short duration of the tunes. Other than that, this is Sevared-class brutal death through and through; the band just seem to wanna get it over with, light fuse and run away from the zombie horde chasing them.

Which is honestly a pity, because even where a song has some decent ideas it's finished in a flash and I came away dissatisfied. I mean, it's great that I could listen to this entirely on a subway ride or a morning jog, but I would have preferred the 23 minutes be devoted to 4-5 songs of substance. Being Killed could do a pretty good 'Corpse, Severe Torture or Severed Savior if they took their time with it, but most of the tunes that are 90 seconds or under here have barely begun before they're over, so only the lengthier 2 minute tracks like "Collapsing Society" and "Brushstrokes in Blood" have a chance to stand out. That's not to say that Massacre of the Living lacks some variety, because they'll experiment with some different riffing techniques and tempos, which only gets you so far in a 50 second song. Basically, the conciseness, which is often a boon to certain grindcore efforts, is a detriment to what otherwise might be a solid death metal records, and the primary reason that success eludes this debut. They did, however, release another record the same year (2008) through Comatose which had fewer and longer tunes, so apparently they learned their lesson quickly, or perhaps it was the idea all along to try their hands at both approaches...

Either way, Massacre of the Living gets few complaints in the production department. The drum machine is rather loud and brickwalled like a lot of modern brutal/tech death outings, but beyond that the levels are fairly balanced. Rhythm guitars are thin, punchy and effectively clear, not that they perform anything truly complex or bewildering that would be difficult to follow, but I enjoy the ability to feel out the riffing progressions and Being Killed does not deny me that pleasure. Bass is almost always a backdrop thing, you can hear a few distorted lines where they're left thrumming on their own (like in "Skull Matter") but by and large they are used to give the riffs more breadth and impact. Vocalist Dave Astor (who drums in Pathology) has a fairly stock guttural that occasionally takes on a fraction of the toilet bowl flush texture you expect in some of the genre's most ridiculous acts; it's not loud or particularly gruesome, but it does serve as a decent contrast to the brighter drumming and guitar tone. I liked the ambient bits that bookended the first and last cut, they definitely have that apocalyptic 80s vibe...the Ghostbusters sample in "Global Shutdown" might seem a little obvious though.

If you're more interested in Being Killed's ability to construct a proper song, then I'd advise you check out that other album Kill Yourself instead. The production is a little grainier than this, but they better fill out their potential on those tunes. Massacre of the Living sounds a little slicker, and has a half dozen killer riffs that secured my attention, but its ultimately annoying that most of the songs can't really generate any momentum for themselves before they're gone. It also affects the lyrics, which are, as you can imagine, short, lacking a lot of effort and rarely going anywhere. Some groups can pull off such ditties, but it's no longer a humorous thing in my book. Maybe when Sore Throat and Napalm Death did it, but I don't even get a rise out of "Hang the Pope" these days. I like death metal best when it immerses me in a torture chamber and then turns me to pulp with a number of devices. Half of Massacre of the Living is like getting a series of insignificant paper cuts, even if it's ultimately not a major commitment just to sit through the entire experience.