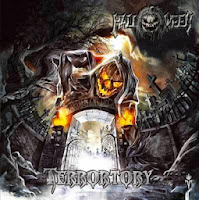 Perhaps I was taken in by the great cover artwork, or perhaps I was expecting too much in the 21st century of the Midwestern metal band that was lucky enough to snag the much-desired Halloween brand in the 80s. Perhaps I was even privately hoping that for a little of that heavy metal magic that has recently reignited the careers of long defunct or merely off-the-radar bands like Warlord, Satan and Attacker. But I'm sad to say that Terrortory not only fails to break into any new territory, or live up to the promise of its archetypal jack-o-lantern-faced Samhain graveyard usher, but it's a bland and insipid experience which just does not know when to quit...72 minutes of uninspired riffing and 'mileage may vary' vocals that aren't even remotely interesting, not to mention lacking in any of the cheesiest 'chills' apart from maybe the narrative intro thing before the title track, and that's really stretching it...

Granted, this is only about 2/5ths of the lineup that recorded the classic Don't Metal With Evil disc in 1985, one I happen to enjoy and break out at least once every October, but even then I wouldn't have thought they could issue such an idea-free, accessible record that lacked almost all of the messy, enthusiastic charms of the debut. Now, to be fair, I haven't followed the Detroit Heavy Metal Horror Show very closely in the years between then and now. The snippets I've heard from albums like Victims of the Night and Horror Fire did little to whet my appetite to pursue them further, but neither felt quite so dated as what I'm hearing on Terrortory. And by 'dated', I don't mean in a good way, but in the dull construction of the riffs that at best emit a passable dual-melody, but at worst are reduced to pitiful chugging rhythms in tunes like opener "Traipsing Through the Blood" that are a piss-poor attempt at generated some power and momentum. Hell, even your lowliest group of corner metalcore kids puts together a bit more excitement with their palm muted effluvium. Here it just seems like Halloween are trying to integrate a little hint of 90s groove or thrash metal influence into their more 80s NWOBHM-flavored writing, and it comes across as wholly unnecessary.

Not to mention, it kills off about half the songs on the record, the rest of which are often more dramatic, slower building numbers where they implement these very bland, cleaner guitar progressions to try and generate a more mournful atmosphere. On the whole, though, the real tragedy is the ubiquitous sense that I'm never in Halloween-land here, nor a graveyard, a haunted house, a slasher flick, or even a candy shoppe buying goodies for the neighborhood kids. You don't write a song called "Scare You" and then not fucking scare anyone with it! And the obvious tribute tunes like "Where is Michael?" don't musically live up to their inspirations (and that's coming from someone who found the Halloween films bland and non-frightening even as a child). On their first record, 27 years ago, these guys put out the sort of wild party metal us kids in the 80s loved, without going all glam-tarded. But Fastway's Trick or Treat soundtrack this isn't. Brian Thomas was once this total wildcard front man whose flawed timbre was all part of the charm...with Terrortory, even he seems to have mellowed out just a little much. Don't get me wrong, he can still hit some screams, and he remains the most unusual or unique feature of the group, but the songs just lack that primal vitality bands once captured in their youth.

I could forgive this if the more seasoned, mature style produced some memorable songwriting, or even a big and compelling evolution in style, but this all feels too 'business as usual', only interspersed with the lame groove/thrash/speed metal riffing in tunes like "Darkside Inside" or "Say Your Prayers". Not all is totally lost here. The lyrics are decent in about half the songs, paeans to classic horror stories or similar imagery being used as a metaphor for relationships. The bass playing, courtesy of George Neal, the other long time member of the group, is quite good for such a clean tone. He has a good sense for subtler fills, and gets into these deep grooves even when he's just playing along the guitar line that sound nice in the speakers. The drums, while not entirely powerful are also fairly flexible, and both the rhythm and lead tone on the guitars are fairly classy. They put echoes on some of Thomas' vocals, probably to compensate that he's just not as crazy as he once was, but really, after decades, who is? Terrortory's polished presentation is certainly not its weak points, rather that it sounds at best like a mix of generic power/thrash and Tony Martin-era Sabbath with inferior riffing.

Also...16 tracks?! I understand this was their first record in about six years, and some of the songs are older tunes from decades prior that hadn't been released, but there are simply too many here that serve the same purposes, so even if the individual riffs and choruses are different, it's aesthetically repetitive. I'm sure I am not the only person that would settle for 8-9 really good tunes with a lot of attention to detail. Alas, this record would fail to produce even a maxi-single's worth of quality. "Scared to Death" and "Trick or Treat" off the debut are light years better than anything here. Not because Halloween have turned to total shit, because they still know how to put together a tune, just not one that has any legs to stand on. The energy levels here feel too maintained, controlled. You look upon Terrortory and you really want it to be cheesy and fun, but it's neither of those things, nor particularly effective in serious mode. Once upon a time this band made me wanna whip my mullet about, pound Old Milwaukees and crash my Trans Am en route to a witch burning. 30 years of 'Motor City Metal', guys...lube this engine, screech these tires, hit us with a wrench and get dirty and greasy in the process.