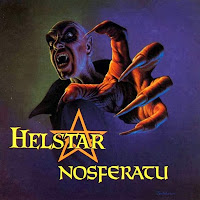 'Neo-classical' might not be the right word to describe Helstar's later 80s material, but records like Nosferatu, or its mutually superb forebear A Distant Thunder were certainly culled from the same classical 'shred' inspiration that spawned the popularity of personalities like Yngwie Malmsteen or half the artists on the Shrapnel Records roster. But what separates this Texan USPM icon from so many of its smarmy, overly showy and self-indulgent peers is just how well they've incorporated the scales and techniques into a strong metal style. Despite the obvious technicality employed by Larry Branagan and André Corbin in the structure of this record, it doesn't feel like an exhibition so much as an extremely classy and unexpected take on a horror legend...

In fact, in covering the 'horror metal' theme lately, I've often complained about how particular records failed to approach their subject matter with anything bordering on an appropriate atmosphere or aesthetic, that they never in fact feel chilling or frightening like their original inspiration. Nosferatu is an unusual exception, in that succeeds despite this lack of scares. The only thing 'terrifying' about this music is the players' acrobatic ability to fly up and down scales to the point that it can impose a sense of vertigo or acrophobia on the listener, but what I truly enjoy is how it lends a credible degree of majesty to the Bram Stoker masterpiece. It's a little confusing that the cover art seems to imply that the theme is centered around F.W. Murnau's follically impaired Nosferatu film, when lyrically its based more on Dracula itself, and possibly various other movie adaptations (like the 1979 flick, which is wonderfully sampled); and I also don't always subscribe to this notion of 'half-concept albums', which I'll get more into later, but for at least 20-25 minutes of this album, provided the listener isn't too intimidated by the constantly complex, noodling riff progressions, Stoker's archetypal antagonist is transformed into this culturally sophisticated entity through Helstar's musical vision, and it's truly a unique treat.

That this record is ambitious is an understatement...gone are the majority of the paraphrased post-Priest or Maiden riff cycles you'd expect, replaced by twisting and winding scale patterns whose veils of proficiency are occasionally parted for some kick-ass, storming power/speed metal surge like the verse riff in "Baptized in Blood". It's as if the Texans arrived from some parallel evolution of the form dated straight back to Mozart or Beethoven with only a cursory influence from the Downing/Tipton or Murray/Smith combos, and only faintly cognizant of Iommi. Best are the points at which the delicate, dextrous picked scales are integrated directly into the verses, such as in "Sleep, Perchance to Scream" where they contrast wonderfully with James Rivera's emotional delivery. Shred-nerds are thrown several bones here, especially the brilliant instrumental "Perseverance and Desperation" with its lush classical acoustic passages and arching solos, and I can fondly remember this being one of the few harder metal records that I and some friends introduced to our Musical Theory class, junior year in High School, which managed to impress all the Vai/Satriani/Rhoads fanatics who represented about half the class. I managed to turn a handful onto Deception Ignored, too, but the colder clinical atmosphere there wasn't as huge a draw as the more accessible, familiar classical overtones of this.

To pull this level of intricacy off, the guitars are mixed with a very thin, but warm and clean tone which reveals each harmony with a crisp and effective clarity. Lots of delicious, mute picked sequences with scale fills that flow seamlessly into each loop. The drums are also somewhat emaciated with a lot of snap and pop to them, the kicks dialed back a little but loads of great fills that fill in whatever blank spaces remain from the dazzling onslaught of the dual melodies. Jerry Abarca's bass lines do take a backseat to the rhythm guitars through much of the content, though he's equally capable and complex, and if you listen closely you're hear that. It's just that the music is already choked with such busyness that to have him performing disparate layers of fills might have resulted in too mindbending a structure. As it stands, this is just accessible enough for the more traditional speed/heavy metal fan while earning its thrills for the musician crowd that was so heavily drawn to it. However, the more the band rages along into pure power metal momentum, as in "Harsh Reality", his lines seem to materialize more forcefully. Plus, Jerry's also pulling double duty here, responsible for some of the pianos and synthesizers that are occasionally incorporated in good taste.

As good as the musicianship is on this disc, what really ties it all together is Rivera's performance which brings a heightened sense of urgency and tension to the 'action' of the plot, vampiric or otherwise. If you asked me to short-list 10 of the greatest melodic singers in US metal history, James would be a goddamn guarantee, and I'd be happy to punch anyone who claimed otherwise in the nose. He's not some technical marvel, perhaps, like Halford, Tate or Dane in their primes. He's not always 'perfect' in execution, but it's actually the wavering pitch of his delivery, the minor flaws that make his voice so memorable. He never fails to sound excited here, and the result is that the narrative force becomes equivocally exuberant...like actors portraying Harker, Dracula and Van Helsing shouting their lines across the theater so all can hear. Don't get me wrong, the man is capable of pulling out some smooth, melodic and 'safe' lines, but it's that frenzied fragility of his pipes that really push this past the limits. Not unlike David Wayne, Bobby Ellsworth or John Oliva, there's a real pain there, it's simply expressed differently. All I can say is that, in an age where so many power metal voices have become vapid and uninspired in their pursuit of pitch perfection, Rivera was and remains a treasure. I might not be able to pick out a Fabio Leone or ZP Theart from a lineup (not that they're bad), but James fucking Rivera? I'll know that voice anywhere. The man is fantastic.

A Distant Thunder has almost always been the pinnacle of Helstar's full-lengths in my estimation, since it was just so forceful and the marriage of potent, complex classical riffing with the subject matter in "The King is Dead", "Tyrannicide", or "Abandon Ship" is a spectacle, and it took the hints of brilliance from the first two records to an entirely new level. That said, there are some evenings in which you might catch me swaying towards Nosferatu's favor. Certainly the subject matter is perfect for this sound, but I will also point out that this also leads to the album's greatest flaw: Helstar half-asses the vampire theme, which encompasses only the former half of the record and then seems to skirt off into some real-world issues, all the rage in the thrash and power metal of the later 80s. I'd have had no problem with that on the earlier outings, but Nosferatu deserved 43 minutes of Transilvanian unity, coherence to its subject matter. You could probably squeeze a trilogy of albums out of Stoker's tale, so 10-11 tunes (including interludes and instrumentals) would have been a breeze. It's simply too distracting to have the lyrics to "Harsh Reality" hammering at me after being taken to this shadowy, enchanted fictional realm. 'Why is the world so fucked up?' feels quite out of place after the tragic magnificence of Count Dracula, and ultimately the Stoker tribute ends up seeming rushed.

"Benediction" and "Harsh Reality", which kick off the non-Dracula arc, stand out a little too much, the former for all the gang shout arrangements, which are, to be fair, also present on some of the theme tracks to a lesser degree. Both are good songs with some killer moments, but they do feel like rougher outtakes from A Distant Thunder and lack some of that fragile eloquence dominating Nosferatu. "Swirling Madness" and "Aieliaria and Everonn" do fit the aesthetic better, the first being one of my favorite songs on the album, but I wish they were lyrically streamlined to the concept. In the end, the record just doesn't feel complete, and whilst this might seem a nitpick in the age of .mp3s and most of mainstream media/culture not giving a shit about the actual format of a 'full album', it definitely holds Nosferatu back from its full potential. Beyond that, though, this remains a timeless and kick-ass exhibition of metal at its finest hour: when it strove for something greater than what had been presented before. Hey, I got no problem with blue collar, down to earth 'eavy fuckin' metal...I've got my shrine to Lemmy like anyone else. But don't forget, when those guys started doing that, it WAS, in its own way, forward-thinking and innovative. Helstar, through the 80s, were a band who honored that rich history by forcing at the limits, and records like A Distant Thunder and Nosferatu a just reward, deserving their legacy. Which is, of course, the reason that unproductive six-year gap to Multiples of Black was such torture, and the end product such a shocking icon of dismay and suckiness...but that, friends, is a horror story I'm not yet ready to deal with, so I'll stick with the bloodsucker.