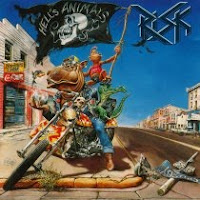 After the superb debut The Daily Horror News, and the promising follow-up EP Ratman, anticipation for further Risk output was running high. Here was an outfit with all the potential to join their countrymen Rage and Running Wild as a top shelf speed metal act, honoring their decision to steer away from the classic styling of their previous incarnation, Faithful Breath. Well, Hell's Animals was not long forthcoming, and it marked an even further deviation from the past, adopting a more directly thrash approach than its predecessor, which only possessed traces of the day's leading edge of aggression. That's not to say that Risk are necessarily bad at the straight up thrash, because there are some decent riffs and ideas present here. But they do not excel in the area, and almost without exception, every leap backwards towards faster, speed/power momentum dominates this album.

It opens with "Monkey Business", which in all honesty sounds like California's Forbidden with the muted melodic, arching rhythms and the haughty, barking vocals (though they're not so melodic as Russ Anderson). The lead and bridge rhythm are the highlights of the song, and this also goes for the following "Perfect Kill", a slower, crisp thrasher with a nice break in the bridge. "Dead or Alive" is an improvement, somewhat closer to The Daily Horror News in tone, with some solid, grooving chords to break up the speed spurts. "The Secret of Our Destiny" makes for a better thrash piece, a winding mosh rhythm plodding forward beneath glistening banks of almost jazzy chords and some superior, quick licks firing through its overall structure. I also enjoyed "Torture and Pain" with its progressive feel and melodic muting, and closer to the end of the album, the excellent power metal piece "Russian Nights" which might have fit in cleanly with the debut album (it's my favorite song here, with vocals similar to early Skyclad-era Martin Walkyier). "Megalomania" and "Epilogue" are also quite good.

There are few duds on the album. I didn't particularly care for "Sicilian Showdown", but it has a choice guitar riff or two, and the "Skid Row" instrumental seems like a throwaway, but then it's a bonus at the end of the album. The production is clear and the guitar tone punchy, and I'd say the mix is actually superior to The Daily Horror News. But what this album lacks is the truly memorable moments found on that album. No "Roadwar", "Speed Kills" or "Revolution Now" to be found here. Hell's Animals is entirely competent and I wouldn't kick it out of bed for eating crackers, but I almost feel like it's 'too thrash'. Yes, 'too thrash', words that I certainly never imagined I'd be thinking, much less typing, but it appears to be the case for this album, which is a few steps below the debut in my affectations.