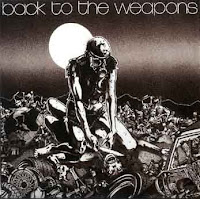 Even a cursory glimpse at their linear progression to aggression will reveal that Living Death were well aware of their times, and the darkening and intensification of the speed and thrash metal scene surrounding them. They responded in turn by turning up their own level of violence, and Back to the Weapons is a fine teaser for their third length Protected from Reality. Unlike the Watch Out! EP from 1985, this wasn't primarily built of recycled, re-recorded material, but four fresh new tracks that are consistently pissed and fun, with Toto Bergmann taking his manic screams to a new level of raging extremity that pierces the ears better than anyone at your local body modification parlor.

The emphasis here was on blinding speed, at least for the first three cuts, all of which are about the best things the band had recorded by this point. "Nuclear Greetings" features bombastic riffing, loaded with both attitude and melody, Bergmann injecting his harpy horrors into each line, even countering himself with a deeper, almost blackish vocal tone in the chorus. "Bloody Dance" doesn't skip a beat, the band forcing themselves directly back into the same pace, with a similar mix of vocals, and this is one of my favorite Living Death tracks ever, though I do still crack up when it sounds like the vocals are themselves about to start laughing. It's very similar to what Destruction might sound like if Schmier just did his screams for the entire duration of a track. "The Way (Your Soul Must Go)" has some deeper, vicious riffs beneath it, but Toto is once again through the stratosphere, like a wicked witch cursing through the skyline, while the band enforces her with gang shouts.

"Child of Illusion" reduces the tempo of the EP to a mid-pace, with more similarity to their material on Vengeance from Hell or Watch Out!. Basic, working class speed metal with incessant shrieking vocals, but clearly the least impressive track here, and I can see why it was tucked on the end and not placed to interject the rapid barrage that led to it. This track aside though, the contents of Back to the Weapons are among the best Living Death had ever produced, before their refinement into a more focused, technical thrash band with Protected from Reality and the succeeding albums. One last, wild ride off into the night, steel engines screaming as the carnage ensues, and if you can find it, almost mandatory for fans of German speed/thrash whether you're into Destruction, Vendetta, Holy Moses, Iron Angel, early Deathrow, Rage, or Paradox to check out.