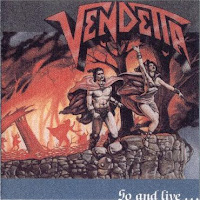 Vendetta must have had a lot of other band's shaking in their boots at the time Go and Live...Stay and Die was released, because it's such a compact, loaded weapon of 'things to do right' that it instantly placed the band among the ranks of the elite. Noise Records deal? Check. Fantastic musicianship? Check. A vocalist with his own personality who wasn't just biting off other German bands of the day? Check. All these elements in place, it was a profound shock that this debut didn't meet greater success for the band, as they were writing music here that Destruction or Kreator would have been proud of, and the vibrant energy of this recording hasn't yet to dissipate after decades of applied aging, even if it's not quite so expansive or evolutionary as its follow-up.

"Suicidal Lunacy" is such a great place to start, with a swerving opening hook that pummels straight into the blitzkrieg of the first verse. Almost immediately, we are introduced to Daxx's vocal regimen, which is akin to Schmier but more 'wasted' sounding. Acidic, feral and accented, it's one of the strong points of the band, and easy enough to distinguish from other front men of this movement. He's also a damn good guitarist, as is his partner in crime Micky, and the two of them have more in their arsenal than most military detachments. Though it's nearly 7 minutes in length, this piece never gets boring, and remarkably, this is yet another of the achievements of Go and Live...Stay and Die. The title track and "Traitor's Fate" are over six minutes long, with the former using a funky rock intro that foreshadows perhaps "War" from the sophomore; the latter is one of the most distinct and forceful gems of German thrash/speed in the 80s.

"System of Death" eclipses both in length, running over 8 minutes, with a classical guitar intro, what sounds like a crashing plane and then a slew of rhythms ranging from mid to fast paced. The latter half of the album holds up, though its contents are briefer and more focused. For example, the ditty "Drugs and Corruption" is just one minute of manic speed thrust, while "On the Road" is overflowing with excellent, grimy speed, guitar melodies plucking through the ballistic discourse. "And the Brave Man Fails" also deserves some notice, with melodic riffing that reminds one of Running Wild, and if you've got a problem with that, you're probably not reading my reviews anyway.

Go and Live...Stay and Die is solid from fore to aft, and about the only place it falls behind some of its peers is in relative lack of catchiness. Where Persecution Mania and Terrible Certainty were almost entirely chiseled into my brain upon my first exposure, there are traces of this album that I will forget despite many listens. I'm going to give the leg up to the sophomore, Brain Damage as being the better of the band's two albums, simply because the songs distinguish themselves that much more, despite the increased ampage of cheese the band layered in to creat some variation. That being said, this truly stands the test of time alongside other unsung heroes as Holy Moses' Finished with the Dogs and Tankard's Chemical Invasion as an example of something that should have broken out like an infection. Shame upon us all.