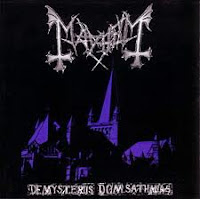 Not that it's necessarily possible to 'objectively' review any work of music to a fault, but when you're up against something with the wealth of history of a De Mysteriis Dom Sathanas, there are even more considerations than usual. This is an album loaded with infamy, for reasons obvious to everyone. I mean, one of the members of the band killed another member. Churches were burned. Angels cried, and devils laughed their hooves off. Somewhere, a kitten or puppy was probably crushed, but nobody noticed. But let's look at the more 'positive' elements to its construction and release: it was fundamental to the careers of some of the most prominent figures in all of the black metal genre, considered so even in today's world.

There is really no comparable lineup to that of Mayhem's full-length debut, and there will perhaps never be. Sure, as far as individual talents are concerned, such collaborations have existed, but not with this level of name dropping. You had the band's leader/writer, the late Øystein Aarseth (Euronymous) on guitars. Jan Axel Blomberg (Hellhammer), drummer for many well known projects, handing out one of the most voracious beatings of his entire career. Varg Vikernes (Burzum), the most loved and hated individual in the entire genre, was bringing up the bass end. The prolific Attila Csihar slathering his unique, grimy vocals all over the rush of the rhythms. Perhaps the least noteworthy individual on the album is other guitarist, Snorre Ruch (known here as Blackthorn), but even this is a man whose underground credibility is well known due to his creation Thorns, which is perhaps the most recognized cult industrial/black metal act to date. Fuck, had they just added Fenriz on the cowbell, the record might have simply exploded, never to be experienced by mortal ears.

Yes, every time I read through that roster, I find it staggering to say the least, but it wouldn't mean a damn thing to me if the music wasn't there to back it up. So, does it add up? For the most part, yes, but in some ways, not. De Mysteriis Dom Sathanas is a highly divisive album, and understandably so, because all manner of personal opinions and investment in the history of its members will always rise to the fore, influencing the emotions of the listener. But in reality, it's just a very tight, solid black metal record that may very well be the best representation of the 'generic' album of its class. There is very little variation woven through the writing, and most of the tracks spend 5-6 minutes blazing through the same 2-3 hooks. About the only element that distinguishes it from the tens of thousands of albums to follow in direct worship would be the vocals of Csihar, which trade in the predictable rasping for a more ghoulish tone, as if some pale aberration were retching all over the carefully packaged contents of the rhythm section.

There was another album around this time that cast a similar shadow: Transilvanian Hunger, one of Darkthrone's numerous masterworks. Both albums are extremely straightforward, with very few surprises hidden amongst the pacing: blast beats and repetitious riffing. I would say that Fenriz and friends easily win out by comparison, because the songs are so much more raw, cutting and effective, with enough character that they completely overcome their perceived flaws. But De Mysteriis Dom Sathanas does feature a few elements you won't find there. I already mentioned the vocals. For another, the bass is much louder, an integral ballast to the forceful momentum of each track. This creates a more tangible, if less haunting emanation. The drums are likewise much stronger than Darkthrone. Blomberg is unquestionably considered the 'greatest' of black metal drummers, more through his history and projects than a technical measurement, but he's a living storm with Mayhem, just not one that kicks up much out of the ordinary. Surely, his work here is a template for the many thousands to follow, but I found his performance here more efficient than interesting.

The lyrics are actually quite simple. Dark images pandering to the most generic of concepts, like vampires, the occult, heresy, and of course that age old standby: death. They're rarely poetic or especially insightful, and they don't conjure up images beyond the expected, but I have to say that ultimately, they service the music quite well, even though so much of it moves at the same relative pace. But when you've got Attila involved, you can take even the most pedestrian and predictable of ideas and squeeze something memorable from them, and that is exactly what happens, as the prim prose is wielded like a cautionary parable from a perverse prophet of the shadows. A lecher. An unpleasant individual that is more apt to smell your blood from the pulpit and lick its lips than offer you the blood of Christ. I actually wish more bands had adhered to a style like this, perhaps not with the same impoverished tonality, but just given their style more character. As it stands, too many have fallen to the belabored rasping camp.

Almost all of the eight songs are straight charges, and all incorporate blasting in at least some capacity. That isn't to say they are completely monotonous, for many of the tracks do have slower bridges where the eeriness of the proceedings is amplified, like the spacious, droning segue which bisects "Freezing Moon", or the brazen tremolo picking meets Black Sabbath breakdown in "From the Dark Past". The most intense of the compositions is "Buried by the Time and Dust", which brakes for no myth or man, but fails to become dull thanks to Attila's incipient lunatic raving and the subtle twists in notation that Ruch and Euronymous evoke. But my favorites are probably "Pagan Fears", with its compelling, rocking motions, or "Cursed in Eternity", of which the rhythms remind me of Emperor's epic In the Nightside Eclipse, sans the symphonic elements. "Funeral Fog" and the closing, savage title track represent the next best crop of material.

De Mysteriis Dom Sathanas does suffer from a small degree of bloat, but that being the case, I still find it myself able to listen through all 46 minutes without complaining. The dark bombast of the album's low end rhythm mechanics provides enough of a fascinating foundation for Attila. The production in general is quite good for the time, especially compared to something with a shadier sound, like the early Immortal albums (which I enjoy for their own reasons). All told, I have never felt the same pining for this as I do for Ablaze in the Northern Sky, Det Som Engang Var, In the Nightside Eclipse, Pentagram, or Frost. I feel like its all too easy to let the roster speak for itself and sway the judgment of quality, but in fact, the music here is just not that impressive beyond the consistency of its delivery. Whereas most of those aforementioned records are brimming with astute evil or majesty through their very building blocks, this album always felt like it was relying on Csihar to perform the sacrificial rites, which he does. Mayhem had a very good album on their hands here, perhaps great, and it's one of a kind as far as their own discography, but personally I've never found it a top of the line experience.