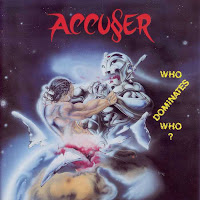 Say what you want about the band's consistently awful cover images, but at least through the 80s (up to 1991's Double Talk) they had the consistent theme of some Ultron looking robot mascot, first through just a glimpse and then out in the open. Here the mechanical thing is clasped in a homoerotic grapple with some muscled entity that represents 'mankind' as they fight for the Earth...well, it's a guess. From the previous year's Experimental Errors EP, I was expecting a fuller shift into straight thrashing territory, and with Who Dominates Who?, this is exactly what Accu§er delivered. Gone were most of the traces of melodic speed from the prior album, those have largely been manifest here through the leads, and damned if the leads aren't generally great.

The album also sounds fantastic, the best production of their career until arguably they arrived at their new, underwhelming 'comeback' album Agitation in 2010. The compositions are rich with riffs, and the mix really lends itself to the sort of impact bands like Destruction, Kreator and Metallica all had at their best. The vocals are like hatchets cutting through the finely plotted riffing, and the opening tracks "Master of Disaster" and "Who Pulls the Wire" both dump the band's previous albums on their asses. "Elected to Suffer" slows down the pace to some good, rock inflected thrashing, but "Symbol of Hate" and "Who Dominates Who?" offer unabated, high velocity thrashing with clinical, precision riffs, and the fun doesn't stop there. About the one criticism I hold of some of the later tracks (including the bonus material) is that they don't always pull off their length. For example, "Called to the Bench" is 8:22, and has a lot going on, but it's not always positive or interesting.

Still, for a band like Accu§er, who have never been able to breach the success barrier, this is extremely well written. The tones are punchy, the vocals pissed off, and the compositional skills not in question. Who Dominates Who? does strangely lack the ability to create memorable chorus parts or truly distinctive riffs, and it doesn't really improve or degrade with age, but it's tight enough to be placed just above the level of 'average'. Had the hooks been as undeniable as the level of talent going into their creation, this would probably have taken the band reasonably further than any other album in their career. As it stands, this is probably the place to start if you're interested in hearing them. The Conviction wasn't bad, and it's got a stronger melodic sensibility to it, with more classic metal hooks coursing through the thrash starved veins, but this sophomore was and remains their strongest output.