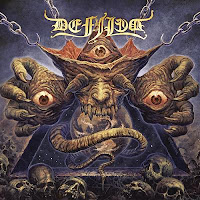 There are not a lot of Japanese death metal bands out there playing with a pure sense of brutality. Generic slamming gore seems to abound, as well as all those metalcore/melodeath hybrids dressed in the latest street fashion, but when it comes to bands dishing out the straight carnage, they are painfully few. Intestine Baalism comes immediately to mind, but another seasoned veteran with almost 20 years experience is Defiled, who have released a couple decent if not exactly memorable efforts in 1991's Erupted Wrath or the 2001 follow-up Ugliness Revealed. The band have pretty much been in hiatus after their 2003 effort Divination, but at long last there is a return through Season of Mist records, with only guitarist Yusuke Sumita returning from the original lineup.

However, I'm guessing many of the band's previous fans could be in for a bit of a shock here, because In Crisis is unfortunately rather shoddy. Through most of the album, the band uses this huge, bludgeoning bass tone which almost overpowers the frenzied, chaotic guitars, and throws the ears off balance. It truly sounds like being beaten to death by a club or wrench, especially the early tracks like "Lethal Agitator" and "Retrogression" where the drums play along with savage but uninteresting, crashing dynamics. Once you dig deeper In Crisis, you'll begin to pick out more interesting individual components. For example, the bass in "Unconscious Slave" tears forth a schizoid, loopy line, or the title track lays you flat with some brickhouse churning rhythms and spastic, paranoid transgressions. I feel like the transitions remain fairly grating and sloppy over the entire course, but eventually there were some tunes like "Intolerant" or the again bass-heavy blast of "Maze of Nescience" where I found a few riffs I could agree to.

Defiled do not lack for playing ability, but it seems what they try to create here is something so bottom heavy, repulsive and violent that it trips over itself. It's a massive platter of splatter and violence, but on one of those rare occasions that you're just not hungry for the guts. Kenji Sato, formerly of Butcher ABC handles the vocals with adequate brutality, but they rarely appear in patterns appropriate to anything more than a baseline clobbering. That said, the approach they're taking here is rather unique, even amongst a loaded international scene of sledgehammer neanderthals and their choke and slam death. A little more precision and better transitions, with perhaps some more evil riffing patterns, and Defiled might find themselves right back near the front of the widening pack.