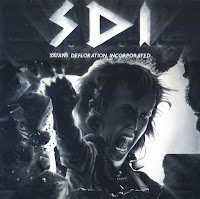 Every class has its clowns. In the case of German thrash and speed metal in the mid-80s, there were a number of options. You could choose Tankard, who married their sense of alcoholic camp to blindingly excellent rhythmic bombardments, unforgettable choruses and albums so good that you'll still feel the hangover decades later. Or, there were other alternatives. S.D.I. is one example, but an example that would be better untouched. To be more specific, it's their debut Satans Defloration Incorporated that should remain untouched: one of the weirdest and most random seeming acronyms in a genre that relied far too often on acronyms, and an attempt at deadpan comedy that falls short both lyrically and musically.

Obviously, these Germans did not take themselves, or anything else seriously, and the record suffers as a result. The lyrics tend to delve into the very world of metal cliches itself surrounding the band, but taken to bizarre new extremes, as with the opener "Quasimodo", which if I'm not mistaken is about the famous hunchback traveling forward in time and attending a metal gig, narrated through lines like: 'Quasimodo's back from middle ages, the bells of Notre Dame is our PA!' Laughable English aside, is this really all that funny? I don't think so, and even the sped up Motorhead style guitars do nothing to salvage it, though I could appreciate the Rainhard Kruse vocals, grunted and growled with plenty of gang shouts for accompaniment. There are a number of other embarrassing tracks like "I Wanna Fuck Ya" with its hilariously lame, blunt passages and disposable punk/speed metal; "Wanker" with its whistled intro; or "Bullshit", which is 5 seconds of the group shouting the title, a waste of space, even if but a little space.

Then there are moments like "Absolut Banger" or "Young Blood" that might have been tolerable without the terrible lyrics; raucous bouts of thrash-infused speed that found a middle ground between Raven, Running Wild and Motorhead, but at least offer a glimpse of the band's future territory (Sign of the Wicked and Mistreated are more accessible speed metal efforts, but far ahead of this in quality). Probably the band I'd compare this album to most would have been Oregon's Wehrmacht , who had a similar, lackluster approach with some fairly shitty music, garnering a cult following despite themselves. But S.D.I. are even less amusing, and though the writing isn't always void of an acceptable riff or two, I feel comfortable in citing this as one of the worst albums in the formative Teutonic thrash trade, from the disproportionate cover imagery to the listless writing.