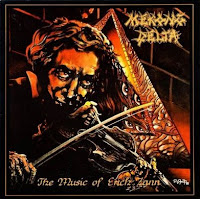 When you've lifted your album title verbatim from a famous H.P. Lovecraft story, then you owe it to us all to not fuck up, and in no way were Mekong Delta about to still the pendulum that they had started swinging a year prior. The Music of Erich Zahn serves as a direct successor to the s/t debut, not only chronologically, but stylistically; and yet it begins to flex more of the band's classical influence and technicality for a stronger overall impression. This is schizoid speed/thrash metal comparable to Destruction's Release from Agony or Deathrow's anomalous Deception Ignored, though there is perhaps a little less brain busting to absorb in the grander scheme.

I'm not sure if I'll ever understand why Mekong Delta's members felt the need to use their pseudonyms. Perhaps they had an overinflated sense of their own fame, which at this time was only whispered in relatively small circles, but I can't say it's not an entertaining tactic. Legendary drummer Jörg Michael returns as 'Gorden Perkins', and lays down one of his most incredible, intense performances, but perhaps the most distinct element of the band at this point was 'Keil', or vocalist Wolfgang Borgmann, who continues to sound like the asylum bound sibling of Rage's Peavy Wagner (who was also once in the band). Borgmann can offer teeter off key, and it can prove distracting, but what I like most is the tonal, ghostlike vocals he uses primarily on the tranquil outro piece "Epilogue", but also in bits and pieces of the harder hitting material.

Speaking of which, it hits pretty damn hard, the riffs always carefully woven into intricate and interesting patterns. "Memories of Tomorrow" uses the ghostlike vocals alongside a melodic, complex chugging pattern that sees the rhythm section in total freakout mode, and it's one of the brightest gems on the album, but I also love some of the more frenzied material like "Hatred", the manic "Confessions of Madness", or the explosive "True Lies", a song which the band are still making 20 years later. "I, King, Will Come" also deserves a mention for its gradual escalation into the plodding riffs and shrill, dual vocal harmonies. When Borgmann hits the lower end of his range, he sounds even MORE like Peavy Wagner. Do you think? Could it be? I mean, he must have been at least tempted, being that he wrote the lyrics for the first two Mekong Deltas.

"Interludium (Begging for Mercy)" foreshadows the band's future neo-classical direction with some hypnotizing acoustics that explode into chugging and swelling, paranoid string sections, with a nice synth guitar lead. There's not really a sore spot to be had here, but I will say that a few of the tracks do lose my attention span from time to time, in their staggering attack. For one, I don't care for the vocals in the opener "Age of Agony". He eventually starts wailing fruitfully, but they feel a little rough in the verses. "The Finale Deluge" also warrants a mixed reaction. I love most of the guitars, and the vocals are cool enough, but the attention does wane in the waking seconds. That said, The Music of Erich Zann is certainly one of the more adventurous German thrash efforts of the 80s, a virtue that the band will compound over the next decade, able to stir up enough interest that they were never left completely behind like a number of their peers.