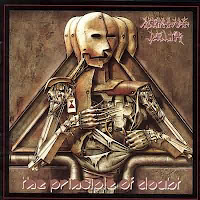 The Principle of Doubt is the third Mekong Delta full length and perhaps the best proof of life of the band's manic, schizo thrash progression to date, before they took a slight dive in quality through their even more highbrow 90s conceptual material. All elements of The Music of Erich Zann have been refined here, carved into even more frenetic blocks of post-modern speed/thrash with the blood of jazz and abstraction coursing through it, and though Wolfgang Borgmann's vocals can still tend towards whiny and annoying, he turns in at least his finest performance at the helm of this band, and coincidentally his last, before the band would acquire Doug Lee from Aaarrg Records labelmates Siren.

This has arguably the strongest opener of the band's entire career in "A Question of Trust", a flipped out diatribe of shifting, thrashing guitars laced through with surgical threads of melody and brilliant, oozing bass lines that create a paranoid, multi-planar dementia. "The Principle of Doubt" itself is quite similar in style, with some cleaner guitar breakdowns, and they continue to layer on the choppy tech thrash with the more moody, lurching "Once I Believed". This trio of tracks alone would represent the pinnacle of the band's 80s work, but they're followed by the charismatic "Ever Since Time Began", with its spastic but memorable vocals in the verse, and the winning streak continues. "Curse of Reality" follows with a throbbing, synthesized martial intro, Borgmann performing some of his eerily close to Peavy Wagner tones, while the drums escalate into the resonance of the slicing chords, and an almost femme vocal line. It's simultaneously the least heavy and most unnerving piece on the first half of the album.

So I suppose it's not a huge surprise when they toss out their frantic, instrumental cover of the "Twilight Zone" theme music, which almost seamlessly blends with the original Mekong Delta fare. A few more static-charged thrashers await in "Shades of Doom" and "The Jester", both of which offer their share of curious composition, though the vocals in the latter do become rather strained in the mellower sequences. "El Colibri" is essentially Ralph Hubert flagellating over the Julio Sagreras original, one of those rare cases of the band's over-indulgence, but well paid for by the album's closer, "No Friend of Mine", which is very well written, with wondrous melodic swells, thick writhing bass and effective, thoughtful chugging.

The Principle of Doubt also sounds cleaner than its two predecessors, and in particular I love the guitar tone, perfectly balanced between airy, rare chords, low end driving mutes and dazzling crescendos of melody. The lyrics revolve around subjects like self determination and the place of the individual within the greater foundation of society, and while they often steer into cliches that don't seem nearly as smart as the musical half of this equation, they seem suitable to the band's conceptual hunger. This album is actually the best place to start if you're mining Mekong's classic catalog for the first time, and it certainly secured the band in the company of other tech thrash wizards like Watchtower, Realm, Toxik, or the then-recent transformation of Deathrow.