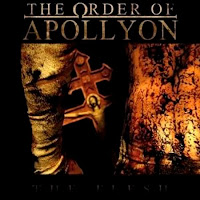 It'd be interesting to think of The Order of Apollyon as some international group that has come together to revolutionize extreme metal, but the reality is not much more than the sum of its parts: a gathering of seasoned individuals who are casting their lot into the fray with a mix of black and death metal elements. There is some level of atmosphere to the production, and the band will often explore the precipice of interesting rhythms and melodies within the bowels of their compositions, but otherwise you've got your expected blend of Morbid Angel and Deicide aesthetics with Norse black metal chords, rasped and guttural vocals in union.

When firing on all incendiary cylinders, they wind up with a track like "Word", which occasionally swaggers into some interesting riff patterns; or the driving, depressive chords that introduce "Never" before the chugging, warlike verse with its moody, melodic glaze. But for every track of note, there seems to be an "Ich Bin Das Licht" or "Four Beasts", in which the balance of grooves, dual vocals and streaming chords doesn't provide more than your average level of malice. A good band to compare this one to would be Belphegor, but The Order of Apollyon are slightly more adventurous in their selection of song elements. In general, though, I tracks the songs that steered away from the chugging groove sequences were the more interesting. Not that the band is bad at forging bottom end ballistics, but they give the album an inconsistency of the cheap vs. the colossal.

With a lineup comprised of B.S.T. (France's Balrog, Aborted, Garwall, etc), James Mcllroy (Cradle of Filth), Peter Benjamin (Akercocke), and Daniel Wilding (Aborted, Trigger the Bloodshed), The Order provides a fine nexus of British, Belgian and French talent, but all have been involved with better albums in the past. That said, there are the workings of something greater under the surface of The Flesh; if it were to shuck a few of the chugging elements and bland snarl/growl dual vocals, the effort would do more to evoke my curiosity. As it stands, there is some fine playing on the album, a few decently written tracks, and a nice production that skillfully mediates the band's rhythmic variation, but nothing truly standout, vile or enigmatic under the horn-throwing eaves.