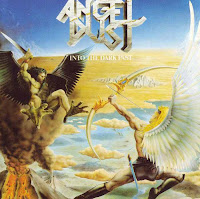 Though Angel Dust is perhaps best known for the progressive power leanings of their later years, they once dwelt on the same cusp as bands like Iron Angel and Vectom, performing a hybrid of speed and thrash that was borne more of melody and velocity than the barbarism of the more popular German thrash acts. While I've found myself getting into a few of their more recent albums, such as Bleed from 1999, I think overall I prefer this earlier phase. They had a more uplifting tone to them than Kreator or Sodom, and you could see their power metal transition from a mile away, but there's still enough savagery in position here for the fan of harder edged thrash, and the vocals on this debut were performed by original guitarist Romme Keymer, with a very down to earth, blunt tone that is wildly different than Dirk Thurisch's meaty melodic presence in the 90s and beyond.

"Into the Dark Past" is an eerie piano piece that ascends into a brief, synthesized choir, and then the storming speed metal of "I'll Come Back", Keymer and Andreas Lohrum weaving the riffs through a proto speed/power metal grinder that would thrill fans of old Helloween, Rage, Iron Angel or Scanner. Romme's voice casts a tinny glow over the surge, not unlike Kai Hansen from his Walls of Jericho days, only lacking the same nasally high tone. Great bass and a great lead switch offer a lot to the bridge, and Frank Banx gets another chance to shine as he propels along below the early melodies of "Legions of Destruction", another well written piece with some superb guitars throughout; possibly one of the best Angel Dust tracks through their entire career, with enough aggression that you could compare it to Vendetta, Destruction, and the first few Deathrow records.

"Gambler" drops to a mid pace for its opening volley, but ramps up speed to provide a verse very similar to what Scanner would be dropping a few years later. Rinse and repeat for both "Fighter's Return" and "Atomic Roar", and herein lies one of the few flaws of Into the Dark Past: several of the songs do seem to blend together, without much to distinguish them individually. Add to this the other weakness, the lack of any truly memorable chorus parts, and you come up with an album that's very good, but well below the masterpiece margin. Granted, "Victims of Madness" is one of the better songs here, with Romme adding some shrieks and a slew of blazing guitar work, and "Marching for Revenge" doesn't disappoint either, with a crazed thrust to the verses, but even these fail to muster a chorus sequence that stands to attention.

A pretty strong argument can be made that Into the Dark Past is Angel Dust's best album, but I think I'd have to give the edge to To Dust You Will Decay and Bleed. Neither has such a purist hard-on for the reckless speed of the time period, but both ultimately succeed where this is lacking, in sticking with you longer. Other albums like Border of Reality and Enlighten the Darkness have some choice moments through to their poppy prog devotion, but are both littered with less appealing filler. In fact, if you compare Into the Dark Past to their most recent album from 2002, Of Human Bondage, it's quite difficult to recognize them as the same band outside of the logo. But if you're seeking more along the lines of Rage's Reign of Fear, Iron Angel's Winds of War, Scanner's Hypertrace, or Vendetta's Brain Damage, this is highly likely to please.