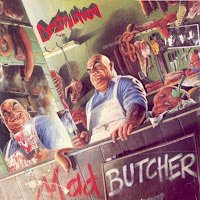 Destruction's 1987 Mad Butcher EP not only sees a fresh paint of coat on one of their all-time, classic tracks, but gives the titular mascot his first iconic appearance 'in the flesh', as it were. Hell, Kreator already had the devil for their mascot, so why not go for a more original spokesperson in the pudgy, cruel-browed balding psycho killer that helped put them on the map? I don't often go out for 'remakes' of songs, and I had no problem with the original "Mad Butcher" from Sentence of Death, despite its raw and crunchy tone, but I'll make an exception in this case, since this EP's edition has likely become the preferred version. However, I will admit that the metalized version of the "Pink Panther" theme which is used as a quirky suffix to this version is wholly unnecessary.

Thankfully, there is more to Mad Butcher than just its title track, and "Reject Emotions" is alone worth the price of admission. Another of those lengthy, fleshed out pieces like "Curse the Gods" or "Life Without Sense" from the previous album, it survives a raunchy clean and 'emotional' vocal verse over the acoustic/lead intro sequence to deliver a juggernaut of bright, superb riffing and a great chorus, Schmier compensating for his earlier adequacy in the track. There is also the amazing neo-classical shred instrumental "The Last Judgement" which displays the influence of traditional European composers on Mike Sifringer's performance, but he's not alone here, as the band had hired Harry Heinrich Wilkens to join him. This is by far the best instrumental that this particular thrash band has committed to disc, and beautiful. Fleshing out the release is a cover of The Plasmatics' "The Damned", from their Coup d'Etat album. It's pretty simple comparative to the Destruction originals, but Schmier does a great turn as a wretched, caustic alternative to Wendy O Williams, and it's pretty atmospheric. The bass solo is just sick.

Of course, this is another of those short form releases which has been re-issued with a neighboring album, and it'd be rare to find someone who doesn't have the version attached to Eternal Devastation. But there are some notable differences, and like Sodom's Expurse of Sodomy or Kreator's Out of the Light...Into the Dark, it surely stands apart and is worth the time and cash of any collector to acquire, especially if he/she is hell bent on having the original formats. "The Damned" isn't necessarily mediocre, but it's possibly the one element of this EP that isn't a big draw. The re-recording of "Mad Butcher", the instrumental and "Reject Emotions" are all fairly essential Destruction, and the contents truly set up the clinical, complex musicianship of the band's next album, Release from Agony, which is impressive if mildly flawed in places.