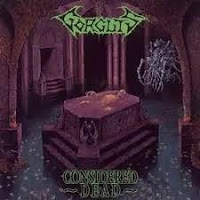 Canada might not be the default metal capital of the world, but they've certainly got an answer for everything. Heavy, speed and thrash metal had all been answered from the north, and we rejoiced at the sounds of Anvil, Razor, Annihilator, Exciter and perhaps most importantly, Voivod. But when death metal began to blister and boil out of Florida, how would they respond to that? Very simply, by taking the essence of the Obituary and Death, stirring in some Pestilence, researching the chemical strands of brutality in secretive Quebecois laboratories, and then unveiling the monstrosity known as Gorguts. It's simple, really, gore + guts = Gorguts, an accumulation of subversive but blunt instruments that might very represent the first noteworthy Canadian death metal act (assuming we aren't counting the cult thrash brutes Slaughter).

Yes, this has that 'Florida' sound to it, so much so that it was even recorded at Morrisound with Scott Burns. Granted, that was a staple of the Roadrunner Records death metal stable in the 90s, but it's pretty clear that Gorguts were adopting the status quo here, and making only slight innovations on the sounds you heard from albums like Leprosy or Slowly We Rot. Thick and pummeling, low guitars, mild progressive tweaks in the songwriting formula, and Luc Lemay's tomb tapping, ghastly vocals, which are plainly influenced by Chuck Schuldiner, John Tardy and Martin van Drunen. Hell, Chris Barnes and James Murphy even make guest appearances on the album, so it's pretty clear what the Canadians were trying to achieve with this record. That said, despite an obvious level of effort, and the added personalities involved, I would not consider Considered Dead to be an A-lister of the late 80s/early 90s death metal wave.

It was appealing, and remains appealing to my own ghastly instincts today, but it simply doesn't have the same level of song power as Death or Pestilence were churning out. "Rottenatomy", "Bodily Corrupted" and "Drifting Remains" are all punchy numbers, with a degree of exploration during the bridge segments, and some excellent leads (love the one at 1:20 in "Hematological Allergy", for example), but the riffs are somewhere shy of jaw dropping. Still, there were not a hell of a lot of albums quite like this one during those times. Most of the enjoyment lies in the gestating skill of the musicians, and of course that Morrisound production. For some, that might actually be the deal breaker, but I find that albums sounding specifically like this one, Death's 1987-1990 catalog or Obituary circa 1989-90 are not too easy to locate.

If you enjoy that very dark, fat but processed sounding guitar tone with the inclusion of its thinner, surgical melodic sparks, then Considered Dead is really a given. It doesn't sound any worse for wear after 20 years, and it easily deserves a spot in your collection of Roadrunner death, right alongside Malevolent Creation's The Ten Commandments or Pestilence's Testimony of the Ancients. The lyrics are the usual festering variety, less medically inclined than Carcass, less offensive than Cannibal Corpse; the artwork is a classic Dan Seagrave, an aberration of animated bone and sinew stalking a wondrous, carnal crypt. Again, this is not the most memorable of death metal classics, but if you seek 38 minutes of old school, brutal, no frills death metal without raw sewage production, it's a reliable exit.