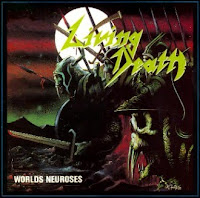 Though I've always had a soft spot for Living Death, enjoying all of their full-lengths to some extent, it wasn't until Protected from Reality that the band had flirted with greatness, and I was really hoping that the fourth album would continue in that direction, adding that last layer of paint to a band who had long deserved some degree of success. Well, Worlds Neuroses was not quite what I had in mind, with a more playful nature found in many of the tracks, but it still manages to score with a few of its catchier pieces. The production is quite good, perhaps the best in their career, but there are a few elements which have shifted poles, and not always for the better.

For one, Thorsten Bergmann the 'screamer' has by this point almost completely disappeared. He'll occasionally scale up to a pathetic window into the past, and he can clearly manifest the old pipes when needed (chorus of "Schizophrenia", for example), but he really tones it down for much of the effort. Also, the band uses a metric ton of gang shouts here, including the first song, "Last Birthday" with its goofy sounding chorus, taking the edge out of what would otherwise have been a decent, speed/thrash opener (though the lead is great). "Die Young" is extremely catchy, with Bergmann adopting an Exodus-like vocal pattern over a great mid-paced riff, even though the actual singing is far different in tone. I really enjoyed the melodic mood of the chorus here, dense and challenging enough with the spike of melody that arrives, and a nice micro-lead bridging over to the second verse. It's pretty tame thrash, but memorable.

The rest of the album is somewhat mixed. "Schizophrenia" sports strange lyrics about 'leading your erection', with the gang shouting 'Morbid brain, Morbid brain!', and Dieter Kelch's bass thundering to lead the way. A pretty odd track, but not bad. "On the 17th Floor" starts with a thrash/doom swagger, and revisits it for the chorus, reminding me a little of "Screaming from the Chamber" from Metal Revolution. "Down" is peppy but forgettable, while the title track has a funny sounding chorus, pumping bass lines and some sweet if sparse guitar lines in the verse. "Bastard (at the Bus Stop)" is an almost Tankard level of ridiculous, but not as well written, but both "Tuesday" and "The Testament of Mr. George" have their moments. There's also a pretty weak track called "Sacred Chao" which no doubt helped lead to the confusion the band would experience when several of them broke away to form the short-lived Sacred Chao. Hey, the previous album had "Eisbein (mit Sauerkraut)", so every album gets one...

No, Worlds Neurosis isn't Protected from Reality, and what might have become another tech thrash beast had curbed its own ambitions to something cleaner, tidier. Personally, I rather miss Bergmann's screaming demon persona, it simply doesn't rear its ugly hide on this album enough. I was longing for the screaming of Metal Revolution, applied to the band's improved, dense and fierce thrashing, like I got in 1987, and that just doesn't happen enough here. Instead, we're treated with a few corny and memorable tracks that stick to the ear just often enough to revisit them. At the same time, I could actually understand why many more casual thrash fans might enjoy this album more than any other in their catalog. It's fairly accessible without Bergmann's excess, and the variety and horseplay makes for a friendlier experience.