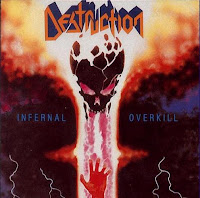 Sentence of Death was a massive initial statement for any band to make, and thus Destruction faced the difficulty of following it up with something more substantial, a full-length worthy of their name. Infernal Overkill might not have been the mind blowing effort many would be expecting, but it certainly solidified Schmier's trio as one of the best in European thrash, easily placing the band on the same tier of talent as American luminaries like Metallica, Slayer, Overkill, and Anthrax. Above all, the record ushered in the much needed improvements in production over Sentence of Death, without losing the primal, sneering thrust and riffing that characterized the EP. The album isn't exactly stacked to the gills with the Germans' best material, but there are a few memorable numbers which served as an eerie presage to the future.

By this I'm referring to tracks like "Antichrist", which naturally foreshadows the impeccable masterwork of both the band's 'comeback' phase and their entire career, The Antichrist. Also "Thrash Attack", a title worth strangling almost any retro douchebag for these days, but fairly proud and novel for its day, especially being that it's only an instrumental with some savage, effective riffing that might have served just as well with vocals. You've got a "Tormentor" here, no relation really to the band or song (Kreator), not one of the better tracks, but level. No, the spotlight here must shine about "Bestial Invasion", with its manic, fluid riffing that fully delivers on the promise of Sentence of Death material ala "Mad Butcher"; or the opener "Invincible Force", for its incredible if distant opening shriek and methodical mayhem. A few of the tracks do miss their mark, like the 7:39 closer "Black Death", which feels a little too bloated for its own good, about 50% great riffs and 50% fodder; and the same ratio would apply to the shorter track "The Ritual".

The production is superior to the EP, with all the instruments drawn out more brightly in the Horst Muller mix, but as a result, it does lack for some of the insane carrion grasping appeal of Sentence. This is more of a professional, solid sounding effort, but I honestly would have hoped for something more vicious, something that would benefit more from Schmier's pinched shrieks and nasal razor diatribes. As it stands, he sounds on fire for about half of his lines, and the rest settle into an almost subdued mediocrity. But the triple 'S' musicianship of Sifringer, Schirmer and Sandmann is undeniable, and Infernal Overkill drips with that same clinical menace that would later have its temperature dropped for the emotional meat lockers of a Release from Agony or a Cracked Brain. I'd be comfortable calling this a 'great' full-length debut, but not entirely memorable, and marginally less impressive than Obsessed by Cruelty or Endless Pain, by their fellow spearheads Sodom and Kreator.