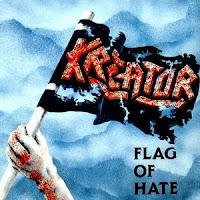 After the surprising debut Endless Pain, anticipation was running wild for whatever the young band Kreator could come up with next; how their raw, brutal but accessible sound would evolve. So Noise Records issued this three-song EP to tease fans for a few months before the arrival of the band's landmark sophomore, Pleasure to Kill. Flag of Hate has by now been issued in numerous formats, and most will own the tracks as a part of the Pleasure to Kill re-issue CD, but it's original European incarnation had but three songs: "Flag of Hate", which we'd already been flattened with on the debut, and then a pair of longer pieces which would be the true gist of why anyone might want to hunt this down.

I speak, of course, of "Take Their Lives" and "Awakening of the Gods", both of which are quite mandatory if you're at all enamored of the band's first three albums. The former is an aggressive brute which opens with a series of two fisted, mid paced thrash riffs in the verse, wonderfully fused to Mille's barking, and a solid chorus. The track is eerily representative of the direction the band would take for Terrible Certainty, their third long-player. "Awakening of the Gods" is the more sprawling track, 7 1/2 minutes long, the most ambitious of the band to date, with a drawn, warlike intro sequence that transmutes into a disgusting splatter of dense, meaty fast thrash that feels more like the body of work that wound up on Pleasure to Kill. The chorus is a little underwhelming, but the riffs betwixt these and the bridge breakdown/lead do compensate, and ultimately it's a worthwhile addition to their catalog.

As for whether this is worth tracking down or not, well, it's almost a moot discussion. Those just interested in the contents can easily snatch them up elsewhere with a killer full-length album to boot, and even the cover image is included. As a collector's item, there's a certain nostalgia for a title like this, that while later rendered irrelevant, once contained some promising new material that you couldn't find elsewhere. "Take Their Lives" and "Awakening of the Gods" would be well worth acquiring to that rare Kreator fan who has only an original LP of Pleasure to Kill or Endless Pain, and Flag of Hate on the whole would make a nice gem on any collector's shelf, if they're concerned with the authenticity of original pressings. Otherwise, not much value to the article itself.