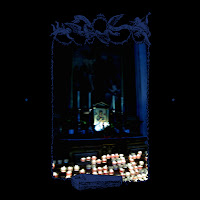 The Negative Plane debut Et in Saecula Saeculorum was the best metal debut album of 2006; a refreshing mesh of traditional black and doom aesthetics that I've not stopped listening to in years, and a truly impressive new player on the generally empty field that is American black metal. Five years might normally seem like an eternity to await a follow-up, especially for a newer band just making their mark, but as Negative Plane proves here, it can also be a good thing, because they've patiently written and delivered another truly effective and haunting album in Stained Glass Revelations, with the all too rare ability to offer its listener 100% immersion.

This is created through the band's stark balance of archaic grace and dour, pummeling oppression, a sweltering passive/aggressive tribute to passion and aggression which evokes both wonder and despair. Deep, dark tremolo guitar lines and chords are infused with spikes of frivolous, shaking melody while the bass surges ever low, downward a spiral of arcane hostility in "Lamentations and Ashes" or "Angels Veiled of Bone", but capable of busting out sheer misanthropy through thundering rhythms reminiscent of early Bathory or Hellhammer/Celtic Frost. But above it all, Nameless Void's harrowing, vocal barks reek of the breath of ancients, the poetry of the dead, and add this timeless, mesmerizing environment of ever sinking into the depths of something far older than time itself.

The leads are conjured with the bite of atonal majesty, and the album is spliced with a series of shorter, horrific interludes which help to drive one even further into its taint. "The Fall" is wrought of distant, tolling bells, crashing percussion and writhing, soiled guitars; "The Third Hour" of roiling pianos and teeming organs; "Charnel Spirit" of a sole, soul absorbing acoustic guitar; and the preamble to the title track, "Stained Glass Reflections", the frightening organs one might expect of its own title. These all thread wonderfully through the shadows into the more impressive, fully fleshed and defleshed compositions like "The One and the Many", "All Souls" and the glorious if oppressive 11:30 minute title track, which is wholly worth the 50 minutes it takes in getting there.

The gloomy architecture on exhibit here is incredibly potent, and it's fascinating how Negative Plane are able to both eschew and cling to conventions simultaneously to temper their life leeching sound. Stained Glass Revelations is raw without becoming feedback, repressed without complaints, and enormously satisfying if you can succumb to the deepening din of its wavelike ministrations of sorrow. It does trade in a bit of the debut's powerful, individual riffing for a more consistent clamor and climate, and very rarely gives a too bleak impression of 'sameness' through the structure, but it's nearly equivalent to its predecessor in value. If I've got to wait until 2016 for another Negative Plane record, I predict it will be well worth it.