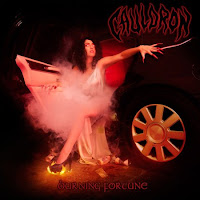 Cauldron is another of the wave of throwback heavy metal bands that have been snapped up by Earache Records in an attempt to help cement the surge of hopeful old school 80s worship, alongside the better regarded White Wizzard and the simply better Enforcer. Of those three, none are necessarily 'bad', but I feel like only the Swedes do it for me the way metal used to. I could pick a record almost at random from my 80s bin and come away with a better, more authentic experience than what White Wizzard are pushing, and my only real interest in Cauldron comes from the fact that they once belonged to the Canadian heavy/doom metal Goat Horn.

Their last album, Chained to the Nite, was okay, possibly impressive if you're very new to the traditional fare, and if anything, Burning Fortune offers a mild tidying up in the same style. The mix here is a little better, drawing out Jason Decay's average, nasal melodies above the din of the guitars, but the songs don't really go anywhere fast. Like a lot of retro metal, they are so intent on recapturing what we already have decades of than taking the style and giving us a bright new spin. Songs like "Miss You to Death" and "Tears Have Come" serve little more than as a tribute to bands like the Scorpions, Fastway, Judas Priest and the like, but lacking the great guitar solos and catchy chorus parts that made them legends to begin with. Oftentimes, as in "Rapid City/Unchained Assault" or "Breaking Through", Cauldron will pick up the pace a little to the speed/power metal level of early Riot, and I feel like this mirrors a direct increase in the quality of what they're writing.

I don't mean to give an impression here that Burning Fortune sucks, because it definitely does not. The vocals and guitar tone are sufficiently taut and clean. It's the sort of album you can sit through if you enjoy the old days, and at least be happy that guys like this actually care about revisiting the terrain. If you've heard Goat Horn, you will understand that these guys are no trend jumpers. They love the past. But come three months time, or six months time, you will not remember a thing about this album. There's a reason for that, and that reason is that Cauldron simply has nothing on the old days, the huge hooks of their forebears. It's not enough to just reprint nostalgia like paper money, a band really has to snatch that hidden fire and brand itself. Where a band like Enforcer marries speed, flair and energy that has just enough charm to serve both retro and future interests, these Canadians just sort of hang out in the exhaust, breathing the dust. Dust enough to get you high for a few moments, but not nearly addictive.