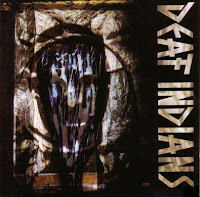 The Deaf Indians were a truly bizarre entity, decking themselves out in tribal paint for their press shots as if they were howling mad savages. Their sole full-length album, Deaf Indians, is just as strange, a weird mix of styles that unfortunately decides to center itself around some of the weakest thrash I've ever heard in the hands of Germans. What's particularly tragic here is that there was obviously some effort put into the album's production, and that for a faint few moments, when the band drifts into the sheer groove of their stoner like, rock elements, they offer a glimpse of potential, but it's so brief that you will blink and think you must have been hallucinating it.

Yes, Deaf Indians diversify themselves with elements of funk, blues and heavy rock, so much so that they're really only about 50% a thrash band, and that is their most abysmal half. Tom V.K.'s vocals are similar to a Phil Rind of Sacred Reich, or perhaps Eric A.K.'s lower register being barfed over and over again, but most of his metered patterns are hideously awkward, to the point of being embarrassing to experience. "Loosa", "A New Murder" and "House of Pain" are particularly cringe worthy, using rap-like repetitions with his thick dump-taking delivery. He essentially pinches a fat loaf over the entire album, with the exception of the slower, morose rock tracks like "Cinderella is Dead" or the psychedelic "Space Hunts" where he spans out and seems to stick (in the latter, reminiscent of a Mike Patton like lower register drone).

But even without this distraction, the musical content of Deaf Indians is a bewildering array of failure that relies heavily on the mediocrity of its guitar grooves to win the listener. It's all presented in a clear, ballsy tone, but I can't fathom how anyone could spend more than 30-60 seconds writing any of these pathetic note patterns. The thrash tracks like "Loosa", "It Might Be" and "From Nowhere" are distinctly terrible, despite any of Tom V.K.'s attempts to dress them up with added vocal charisma. I can't tell if the band is jerking my chain or if they were serious about perpetuating some form of stoner funk/thrash, but either course wound up at the same, abominable finish lame. Deaf Indians is an anomaly of badly executed bounce that makes even the most petulant examples of 90s groove/thrash look shining by comparison. It can't have been easy to suck this hard. There must have been careful planning.