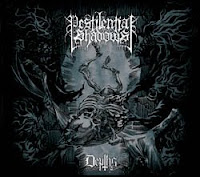 If you've never before been exposed to Pestilential Shadows, then you might be in for somewhat of a treat, as the band is comprised of members of the brilliant Nazxul, whose last album Iconoclast is hands down the greatest symphonic black metal album to hail from the continent of Australia. But the similarities are more than skin deep, because one could argue that this band was the same entity, minus the heavy use of synthesizers, but nearly as epic in atmosphere. Pestilential Shadows focus fully on the mood created by the driving guitar chords, and Depths sees the band at their best to date.

They've got a knack for using familiar sounding note progressions and putting just enough passion behind them that they feel fresh and adventurous. "Lost Geists of the Sunlight Sphere" is spacious and voluminous, its swelling debris of dampened melodies casting off shadows that resonate in the listener's mind long after, while the breakdown segues explore minimal, psyche rock influence with cleaner guitars, bass grooves and haunted whispers. It sets the tone for about the entire album, followed by the similar, glorious sadness of "Tribulations of Man", but the Australians also pick up speed through "Choirs Beyond the Blackened Stars" and the ravaging "Architects of the Spear". The brooding ambient passage that opens "Shrine" gives way to the most majestic piece here, and I'm also taken with the drifting sadness that is "Putrid Earth".

Depths is quite good, but it's the sort of dreamlike, wide open good that might take some level of absorption and attention that one is not used to when listening through black metal records. The tones here are quite rich, repetitive, fully realized and cognizant of their weight upon the listener. It reminds me slightly of the band Altar of Plagues, or perhaps fellow Australians Austere (Desolate having been in that band), but with a more accessible overall aesthetic, and less tortured vocals. I've listened to most of the band's prior output, but have never been grasped as easily as I was here, nor as effectively. It's not perfect, and it's certainly not intricate, but the manifestation of crestfallen miasma lurking in the shadows of the guitars here are nothing if not welcome ghosts.