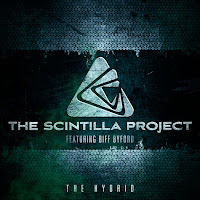 The Hybrid is one of those 'music inspired by the motion picture' albums which was meant to accompany a film without actually featuring music from the film. The film went under the same title, although it was also known as Scintilla, a sci-fi horror flick that I've actually seen before, but remember little about, apart from the alien hybrids having these really freaky eyes that gave me at least one nightmare not long after viewing it. So it's possible a track or two from this might have popped up in the movie and I can't remember. at any rate, why I'm writing about this is because the spearheads behind this were drummer Lionel Hicks, prolific drummer and the producer on the film, and none other than Biff Byford, the mighty vocalist of legends Saxon, and I whom I believe was at some time a resident in Huddersfield, where the film was shot. They're joined by a host of other British veterans like Gizz Butt of the English Dogs and producer/Sabbat-slinger Andy Sneap, to name a couple.

I was kind of crossing my fingers for some of epic spin on the Saxon sound, and though I'm not always satisfied with the results, that's exactly what this is, an album that transports Byford's blue collar, distinct presence onto the bridge of a rock opera-like vessel, where he capably takes the helm. No big surprise, since his vocal style has always translated well to whatever minor mutations his mainstay has made throughout their extensive career...the AOR sounds they strove for in the 80s, or the more power metal leanings the band has taken on for several of their records in the last couple decades. At times I was reminded of something like Ayreon, only without the large cast of singers. Mid paced crunchy metal anthems dressed up by a lot of orchestration and proggy synthesizers that help elevate the album towards the higher concepts of its subject matter. I guess if you can imagine Biff fronting a group like Celesty or Vanden Plas, you're in the right ballpark. There are a couple notably heavier moments where the guitars get a little more intense, but most of the chords and chugging patterns here exist largely to thrust the orchestrated momentum forward and create a foundation for his voice, which is easily the star of the show.

I wasn't even aware that Biff was a big sci-fi fan, although I know there have been a few tunes in his repertoire (like "Metalhead") which played with such subjects; but I'm glad he is, because he does sound quite fantastic here like he usually does, with a lot of great sustained lines and more melody inherent to his grainy, unique pitch than one might think. A track like "Angels" uses his voice as well as anything I've ever heard, sounding awesome against the beats and symphonics. John (Yannis) K of Biomechanical and Balance of Power performs the synths and keeps quite busy here; they're well integrated in the mix and applied with taste, even when they're almost completely carrying the music as they do in "Some Nightmare", one of the most glorious tracks of the lot, he manages not to overdo it, and when the lead guitars slice in they take over as they should. The production is totally pro here, highly polished without leeching away the power from the metal instruments at the core. There is one Saxon tune present, "No Rest for the Wicked" from Call to Arms, all synthed out here so that it fits in with the rest of the material.

It's a solid record, provided you don't mind hearing one of the NWOBHM's brightest singing on an album that is more dramatic, grandiose and accessible than those of his mainstay. It's almost a shame that we're unlikely to ever get more of this, or that it seemed to turn out a mere vanity project that didn't make many ripples, even among the Saxon fanbase. A few tunes are blander than others, and when it comes to guitar riffs, there aren't many that stand out, since they're generally so basic and foundational. Also, the feel of these tunes doesn't quite reflect the sci-fi/horror vibe of the film as much as the lyrics might, but that's just a matter of my own interpretation.