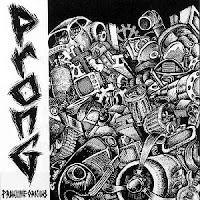 Primitive Origins might have served personally as more of a primer for the brilliant record to follow, but it's apparent that even in its origins, Prong was a slight standout from the rest of the crossover crowd. Not forward, nor above, but sideways, and below, sporting a novel approach to the style that would drip straight into their sewer-thrash future. I liken this EP to a mix of their NYC peers and the West Coast splatterthrash crossover of acts like Cryptic Slaughter or The Accüsed. This isn't quite so forceful or powerful as a disc like the Crumbsuckers' Life of Dreams, but it certainly takes a more nuanced and left-field approach to its riffing, which would carry through to all of their later releases as they morphed their sound throughout the 90s and beyond, until only recently when they seem to have settled on a particular polished thrash style for a number of subsequent albums.

While the whole three-piece lineup here is solid, I think it's really Tommy Victor who contributes the most distinct ingredients. His vocals have a downtrodden gruffness to them which is both abusive and ugly, somewhat more primitive even than a lot of the other tough guy barkers in the NYC crowd. It's almost like having some battered construction worker or public works engineer coming off shift and grumbling at you in some late night greasy spoon, and yet the lyrics are quite heavily sociopolitical and fairly interesting even by the pissed off standards of the 80s. His guitars, though, are even more interesting, raw and fast but not afraid to inject a little eerie dissonance into the chord choices that makes them feel subterranean, or some more pure metallic tremolo picking parts like the intro to "In My Veins" or the bridge of "Watching". There are frilly, wild lead guitars here too, something you don't always expect due to the punk roots it has sprouted from. Don't get me wrong, there is plenty of angry hardcore charge riffing happening all over the place, so fans of Agnostic Front and Sick of It All will find plenty to love here, but Prong certainly didn't shy away from the longhair aspect of their band, and it's this complete embrace of the varying aspects, and those they'd adopt down the road, that propels them.

Now, granted, I don't personally find a lot of the riffing here to be quite that memorable, especially the more standard hardcore/crossover riffs of which there are a good amount. Some of the patterns certainly set up tracks they'd write for Force Fed, my favorite Prong album to this day, but the notes just don't always fall into place, and this actually has a cleaner production than that album, crude by some standards but not as rash and raw and atmospheric sounding as the successor. But with eight tracks in under 20 minutes, its concise and energetic enough that you don't ever have time to get bored with whatever material you find lesser, and there are enough of those interesting little shifts here to keep your attention. I'd also say that, despite the production differences, this was one of the periods where the group's sound evolved the least between releases. Sure, Force Fed has more of a dynamic range, stickier riffs, and more abrasive production, but the style between the two is overall comparable enough that if you enjoy one you'd be drawn to the other.

Considering the historical value of this record, and the subcultural popularity of New York hardcore which thrives on to this day, I'm kind of surprised Primitive Origins hasn't seen some sort of large label re-release with one of the imprints Prong later circulated around towards. For all I know there is some sort of legal issue or lack of interest by the band, but I think this is one that fits right in with an interest in that time period, and while I'm not as much a fan of this as I am Brightside, Blood Sweat and No Tears, Life of Dreams or even the Crumbsucker's own metallic evolution Beast On My Back, it's a good one to break out once in awhile for those genuine old tones, and its earnest energy. At the same time, it's really just hovering over the manhole the band would plunge into for one of the best, grimiest, and still relatively underappreciated albums to ever hail from that scene.