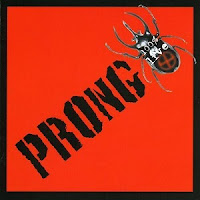 When Prong re-emerged after a five year hiatus, the longest yet in the band's career, they did so with their first full-length live album. This wasn't the first time they'd given us the uncut experience, as they had a Peel Sessions EP and another rare live EP that I've never actually had my hands on; but 16 years into their existence seems like a respectable time to produce such a product and one would assume this would be handled professionally, especially since they had such a great run into and through the 90s. Well, 100% Live, cultivated from a couple gigs in the Midwest, certainly sounds decent enough in terms of its mix and even the song selection, but I don't know that it was necessarily arranged to have a lot of impact on the listener, to give him/her that same rush of seeing Tommy and company on a stage.

What I mean is that the track listing here, as presented to the fan, seems a bit too mellow up front, where you'd expect them to start off with some ragers and then get a little more dynamic as the sets progressed. "Rude Awakening" is an awesome song but it's a little too subdued to kick off a set from a band built on thrash, and then after that they launch into a chuggy tune called "Initiation" which was entirely new to us (they'd later change the name for Scorpio Rising), though it did build to a decent chorus that would have felt at home on the two studio albums before it, some nice bass lines from ex-Lizzy Borden player Brian Perry (who would not appear on any of the studio material). Proceeding into "Broken Peace", a track that doesn't quite work as well within the organic live environment as it did in the studio, there's a real sense that the band is kind of phoning it on or taking it a little too easy, not because they're cocking it all up but because of how they structured this. Even when they take on a more aggressive tune like "Another Worldly Device" it feels a little sluggish, the one real exception being "Disbelief" when they reach straight back to their roots and go hardcore wild, or "Cut-Rate" from Cleansing...in fact there's just a chunk of material near the end of the live album that seems more driven and ferocious than the rest and it stands out too much, including the finale, "Unconditional".

I think you can also notice small production differences in some of the material which is always the risk when you're not just pulling it from a single source, and even though the wilder closing tracks might seem less cleanly produced, they're so much more fun. Don't get me wrong, I like almost all the songs on this album in their studio incarnations, but the whole industrial/groove arsenal in their sound has never seemed to come across live as well as the classics which sound awesome. All told, 100% Live is certainly not a bad representation of their chops, but it just seems inconsistent in the context of a record that's you'd think was supposed to thrill the audience at their return. A better arrangement of the tracks would have done wonders for this one, as it stands I'll just be sticking to their studio works because there's not much reason to revisit this.