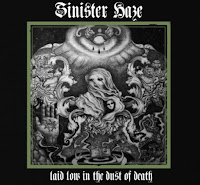 The first thing that struck me about Laid Low in the Dust of Death is just how live and loose the production feels, almost as if the band had just plugged in, come up with a few basic stoner doom grooves and then let the tape spin. That's not to say it lacks any structure, just that it's so dependent on these simple repetitions that most of the groups in this niche could probably wing it. The goal here is to put the listeners into a bong swirling trance, let them just hook onto the patterns that their mind surely already knows if they're listening to a deep underground outfit like this one, and then let the smoke and nostalgia onward. I guess you could compare it to something like Sleep's Jerusalem (aka Dopesmoker) only in smaller chunks and with the caveat that the album is comprised of numerous songs, though they often sound a lot alike. For someone who actually finds that album as boring as dick, like I do, an effort like Laid Low automatically fights an uphill battle...

It gets a few meters up the slope before it stalls out, because there are some elements I do enjoy about it. I think the album sounds like it looks, proof of its own concept. I like the cover artwork, I love the band's name, and I think that stylistically they live up to that, only I wish they could do it with a little more musicality. The vocals are quite interesting and passionate, full of flaws as the guy fleshes out a limited middle range, but still evoking some passion and personality. Obviously a singer like Ozzy would be the starting reference point, but I felt a lot of other 60s and 70s fuzz and psychedelic rock creeping in there. Extremely bluesy, with some strained lines for heavy emphasis and also occasional effects that help it drift in step with the musical aesthetic. Another highlight is the lead guitar, which is constantly buzzing off into these trippy and tormented electrics which provided for me most of the real escape I'm hoping for on an effort like this one. The rhythm guitar riffs are quite generic in terms of chord progressions, but not unpleasant, and there are a few moments where they pick up and get a little jammier, with the drums grooving just a fraction harder. The bass tone is very thick and present, but also doesn't do much creative except anchor down the guitars, and match step with the acoustic, crashing drums that thunder below without any unexpected twists or turns.

This is the sort of album where, if you were to approach expecting nothing else but rudimentary, slow stoner rock played with a little more friction when it self-intensifies, you'd get what you bargained for, but I can't help feeling that about 50% more creativity would have gone a long way towards a more memorable experience. This would probably be best applied to the rhythm section, throwing us an off-center beat through the grooves. Maybe up the percussion used in the kit, go more tribal at points, add some fat bass lines that curve away a little further from the primary chords of the tracks. That might detract a little from the sporadic nature of laying out all these samey rhythms and creating a consistent hypnosis throughout the album, but in terms of potential musical value it would make up the difference. As it stands, Laid Low in the Dust of Death is rather tedious, barely more than what the doctor ordered, and if you've already heard any dozen of the other albums in this heavily saturated field then it's just the bare minimum of effectiveness.