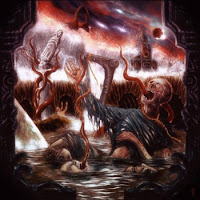 Severed Limbs is another of the Rogga Johansson solo projects where he's tackling some microverse of death metal influence by his lonesome without an established collaboration, and I think this one gets a severed leg up on some of his others in that it more closely resembles OSDM from the States more so than the total Swedish sound he often champions with a number of his higher profile bands like Paganizer or Revolting. Don't get me wrong, you'll still heat a bit of the similar tone and simplistic songwriting he can churn out faster than some individual scenes, but this one doesn't sound too much like it's trying to be any one individual or grouping of bands local to him. There was clearly a tongue in cheek sort of slasher/gore concept running through the earlier efforts In Each Scenario You Die and Collector of Limbs, but that's 'transcended' more into pure morbid horror worship here with titles like "Crushed by the Droid", "The Surface Waits the Hunter", "The Clock Says Devouring Frenzy" or "Submerged in the Sewers".

Sores Galore sounds like it was built upon the foundations of early Death and Obituary, with a dash of Bolt Thrower, Grave or Autopsy thrown in the mix. You've got those huge, evil chords you might remember from Cause of Death, but the creepy tremolo picked guitars are more Scream Bloody Gore or Leprosy. However, added to that is the sheen of muscle that is clearly descended from thrash and then carried forward by slower, groovier death metal bands. The rhythm guitar tone is quite good here, clear and powerful but has a nice crisp edge to it, and where the leads arrive they keep an appreciable contrast, even though they're brief and not too flashy. His growls here are also well done, more so than in his other projects like Humanity Delete, because they've got just the right amount of reverb to them, and they don't feel like a typical blunt guttural he'd use elsewhere. They maintain an aura of evil around them and have a little bit of T.G. Warrior hmph buried within, in fact there are even a couple riff breaks where I was reminded slightly of Celtic Frost but that would make sense as Obituary's better, early works were also clearly descended from them. The drums and bass here are functional but never stand out on their own, which is unfortunate since a few of the groovier riffs could have used some more interesting low end lines to make them catchier.

This is likely the sort of album of which you can predict nearly every chord pattern, but despite that it maintains an air of timelessness purely through the choice of notes and how those vocals and the whole mix of the album sounds great. I've been rummaging through a lot of Rogga's projects lately to see if I've missed anything, and I'd have to say this album does standout as one of the cooler ones and just a fraction distinctive from several of the others. That's not to say Sores Galore is great, but if you want a dependable dose of late 80s/early 90s style death metal, this one could have you nodding your head as you crank it out your speakers. Also really dig the cover artwork.