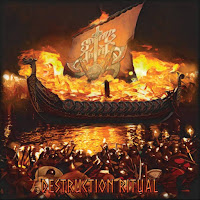 If the cover to Destruction Ritual is any indicator, Gustafson wasn't about to deviate far from the Satans Taint debut album, possibly diving a little further into the generic Viking theme pasted on to the project, or at least its artwork and typography. This was a slightly higher profile album than the first, since it seemed to get a limited CD release through the rekindled Megaforce imprint, and Bobby decided to work with a couple of the same musicians, so I went into this expecting some cohesion and improvements. Unfortunately, there is still a bit of the stylistic inconsistency and disconnect that dominated its predecessor, with the two vocalists flipping back and forth between a higher pitched, almost Joey Belladonna style vocal with Halford screams and then the harsher, biting THRASH vocals. Neither of these guys is a slouch for his respective style, mind you, but the album just never seems to settle into anything and it almost constantly feels more like a 'recording project'.

To me, the first track here "Sumbel" was a decent power/thrash style song and I wouldn't have been put out if the whole album continued along this thread, but as soon as it launches into the meatier thrash of "Sorry You Were Ever Born" I was already feeling that thread unravel. It's not a terrible song, but wants very badly to be 90s-00s Overkill with a different vocalist. The keyboards in the chorus were a surprise, but they too feel at odds with the rest of the track. And then, to capitalize on its downward spiral, it launches into an awful, Pantera-like groove metal track, and there are a number of others which also fit this bill, immediately turning me off; don't get me wrong, I'm not some hater for the original, but unfortunately so many of their bar-level knockoffs are less than compelling and can't really match the attitude. Amusingly enough, there's a "Skullkrusher II" track here which mirrors the doom vibe of the Overkill original, from Bobby's last studio album with the band, and it's actually a half-decent one which is better than most of the other songs you'll find here, not unlike how "Gothic Serpent" stood out on the debut. Had Satans Taint been a doom metal band with the same singer, I think you'd hear a lot more about it, because it's fairly tight...

Instead, we get a lot more of the ho-hum Viking thrash, which isn't lacking for some energy and keeps a pretty professional style, but just feels like a lot of other throwaway 'modern' thrash circa the later 90s or early 00s when it wasn't exactly taboo to return to the form, but bands still peppered it with a lotta unwelcome groove metal elements from the past decade. Rhythm section is solid over the course of the album, and Bobby's tone has that same saturated bite you remember from the 80s, only a fraction more modernized, like Germany's Destruction through the last 20 years. It actually sounds great when an actual decent riff happens, but they are in scarce supply throughout Destruction Ritual and a lot of the banal chugging is just sleep-inducing. In fact a lot of these riffs would have cured insomnia back in the 80s. I know I'm being harsh here, but this sophomore is yet another record which doesn't play to its strengths. It's poundingly heavy, but fleshed out with too many effortless filler rhythm guitars. Bobby's a very good guitarist, hell he played on my favorite Overkill album Taking Over, but this just doesn't have that magic. I did read somewhere that he recently started playing with Vio-lence, and his tone and style are an amazing fit for their style, especially Eternal Nightmare and Oppressing the Masses, so I'm a lot more hopeful for what might come of that. Destruction Ritual isn't awful by any means, but I found it a small step below even Axe to the Head of My Enemies.