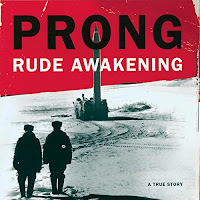 Rude Awakening was another of those heavily divisive albums of the 90s, by a band that was constantly reinvigorating itself by layering in more influences than the hardcore punk and thrash which fueled it so heavily in the decade before. After a somewhat successful LP with Cleansing, they decided to shift further into their electronic fetish, and the result was an album incorporating everything from industrial embellishments, hip hop beats, bouncy groove metal riffs that mirrored some of the burgeoning nu metal of the day, and even some moody alternative rock which would structure some of Victor's vocal stylings and how the band would assembled its verse and chorus structures. Like its predecessor, it somehow managed to make all of this work, to fuse it onto the urban rusted framework that has always supported the group's atmosphere and lyrical disposition, and evoke a timelessness that pervades the stylistic migration of their first five full-lengths.

I absolutely loved the production on this one; whereas Cleansing was a bit more level instrumentally, this one is heavily saturated, fatter and really grooves along hard. Paul Vincent Raven provided the bass guitars for the second time, and his tone is awesome, these rumbling bass-lines which always enhanced all of Tommy's drudging, basic chug-laden riffs, and his more interesting squeals, pinches, melodic chords and other trickery that created such a well-rounded, exploratory sound. The drums feel a lot more electronic this time around, basically a blend of Ted Parsons steady mechanistic style and some actual programming, but as someone who was also playing around in an industrial band in the mid to late 90s I really enjoyed how it all came out. Sure, some of these beats are mighty basic, but when you listen closely you can hear all of these little beeps and gleeps and percussion effects that keep them interesting even when a few of Tommy's duller chug riffs are playing over them. At times this album feels like some dudes picked up a basic drum machine, pressed the pre-sets for some trip hop beats and then just let their imaginations splash all over that, and while it might seem crude or 'boring' to some, it forced Victor and company into creating some catchy riffs and vocal lines to help entrance the listener.

The vocals are the same blunt street-ready philosophy we'd always gotten, perhaps flirting a little bit more with rap or poetry in a couple of the verses but not too distanced from where they were on the 1994 album. I have to say the first three tracks on this remain some of my favorites in their catalog, from the jerky, slamming "Controller" that sounded like an industrialized Chaos A.D. outtake, through the insanely groovy and subversive "Caprice" and its adorable electronic melodies, to the more mellow, catchy, pop-like title track. Sure, it had a fairly awful spur-of-the-moment rockstar video courtesy of Rob Zombie, which does not at all represent the song's message, the album, or the band, but I'll try not to hold that against it since I've been listening to this one for almost a quarter century now and never gotten tired of it. These cuts do overshadow a few of the other tunes, to be honest, but even the weaker, less interesting tunes have some addicting vocal lines or effects which take my fingers off the skip button, and there are some deep, hypnotic grooves in cuts like "Without Hope" and "Slicing"; or a slight spin back to robotic thrash metal with "Mansruin", a tune likely to please that 90s industrial metal audience weaned on "Stigmata", "Ultra" and "Jesus Built My Hotrod". No surprise really that Tommy would go on to play with Ministry himself for awhile as Raven did.

It would be easy to write off Rude Awakening for the variety of influences tainting the band's original thrash concept, or because of its unfortunately parallels to the bad metal trends of its day, but it comes together really well, simplistic but engaging and memorable, almost like a automated factory version of Helmet, who were also trending hard at the time (and rightly so). Another of my favorite Prong albums, even long after its novelty had worn off, and I'm always happy to break it down off the shelf and go exploring through it again. Sadly, this would be the last album before the band would go on a sizable hiatus, before returning with something less creative and/or interesting, but in the interim Victor got to play with Ministry, and even Danzig, where he remains today in a more lucrative role.