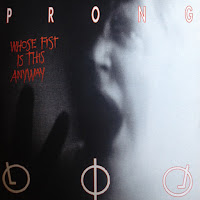 This EP always struck me as a rather strange, unfortunate sort of experiment, the main reasons being that 1) the track "Whose Fist is This Anyway?" isn't even present, though it would appear a couple years later on the Cleansing album. I suppose they could have just thought it was a clever title and then one that deserved to be used for more than just a largely throwaway label-filler release like this one, but in retrospect anyone encountering that album first would probably be confused when they were tracking this down from the limited catalog Prong had available at the time. 2) I just don't think industrial/dance remixes of tracks off Prove You Wrong was bound to work out all that well, and this sort of thing could have waited, again for Cleansing, of which the material feels a lot more adjacent to being techno-fied, industrialized and otherwise fucked with.

What's more, this is just bad...this is possibly the worst release in the entire Prong discography. The electro mixes are almost all awful, with few changes other than clanging and banging and annoyance that people would have only thought made for good industrial music in the early 90s. Okay, to be fair, sometimes they did, but the strength of Prong is the riffs, vocals and energy and it just doesn't benefit a track like "Prove You Wrong" or "Hell If I Could" to be fragmented off and repurposed like this. The latter is particularly bad, a series of boring beats and bass-lines that suddenly morphs into the proper guitar riffs and some heavily filtered vocals. Granted, that vocal effect might have been cool in the original tune, but here it just feels like a bunch of buttons are being pressed, and that's one of the critical flaws...'What would this part sound like if we added this effect?' is fun for dicking around in the studio with your buds, but later turning it into a commercial release in some wishful attempt to align with the KDMFMs and Ministry's of the world just isn't effective here. And ALL the alternate mixes of their original songs here are laughable at best, like the miserable 'Safety Mix' of "Irrelevant Thoughts", a song I happened to like a lot. And there are TWO mixes of "Prove You Wrong" which both suck...

Interestingly, they also remix their Stranglers' cover "Get a Grip (On Yourself)" so now it sounds like total nonsense, and then they add a cover of The Music Machine's "Talk Talk", which might be the best tune on here only by the process of elimination, but is otherwise mediocre enough that I'm happy they didn't soil Prove You Wrong by including it. They turn the song into a bouncing bore that doesn't do much justice to the original and certainly isn't interesting in context to the great material I enjoyed from Prong throughout the 90s. So basically this entire release is useless musically, a waste of 26 minutes. The cover image is kind of interesting, I like how they split the 'prong' icon into the three circles, but that's the most memorable thing about it. I enjoy the first five Prong albums a lot but this was a very unfortunate misstep which at one point had me dreading what might come after Prove You Wrong. Luckily, that turned out a LOT fucking better than I thought.