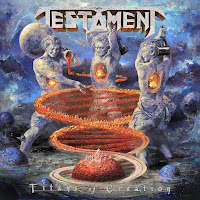 It's rarely a good sign when the first thing everyone seems to be discussing about a new record is a disdain for its cover art, and yet that's what I encountered on numerous forums and social media outlets before a lick of Testament's 13th full-length album Titans of Creation had graced my ears. Personally I don't think it's all that bad of a choice; Eliran Kantor has a distinct painting style and I think it does translate rather well with this particular image, even if it's not quite as cool as his work on Dark Roots of Earth or Sigh's In Somniphobia. The one hangup I can agree with is that the 'titans' might have had more bestial faces, or at least some meaner scowls as they hammered out the universe and populated it with fiery wine-beings. In that case it might have been a better marriage with the band's thrashing aggression, but if you can remember Testament's earliest range of covers, Kantor's run over these latest four albums has at least been more involved and interesting to look over.

Musically, this is Testament-by-numbers to the extent that I think I've run through the entire album a half dozen times with hardly any of its riffing progressions ever really standing forth from the rest, or from the band's somewhat substantial catalog. This is certainly channeling the 'pure' thrash metal the band pioneered through it's first four albums, with chug heavy rhythm guitars moving at a bombastic middle pace as a seat for Chuck Billy's domineering vocals and the Skolnick/Peterson leads. A near comparison would be The Gathering or The Formation of Damnation, the latter of which I quite enjoyed, examples of when the band righted its ship from the death metal distractions inherent on efforts like Demonic or, to a lesser extent, Low. But for some reason this selection of cuts isn't quite breaking the skin for me as they are for others. I was no huge fan of its predecessor, The Brotherhood of the Snake, but I think one of the issues here is that the album actually becomes its most interesting when the band remembers the rhythm section it's equipped with, and takes on a more progressive and curious composition, like the opening to "City of Angels" where DiGiorgio's thicker bass lines play a more prominent roll than they do under the bulk of the rhythm guitars on most of the thrashers.

There are certainly a few positives here. The production is chunky but beautifully balances out the instruments and vocals, with a clear drum mix, a perfect heft to the bass guitar, and plenty of room for the little effects they put on the bass/guitars or occasionally on the vocals. Billy is in fine form in general, his voice carrying the perfect level of atmosphere whether he's barking out his Hetfield-like harsher lines or the hazier, melodic intonation he'll switch into. The leads are pretty well written if not highly memorable. With a lineup of musicians like this, you could very easily fly off the handle with all kinds of excess wank and showmanship, but to their credit, the Skolnick/DiGiorgio/Hoglan trio remains as mercenary and true to the Testament spirit as they've always been. Granted, a little more experimentation here, with or without the need for flashy instrumentation, might have created a more interesting overall, but this one seems to celebrate its own generic sense of momentum, with a lot of stock rhythm guitar parts that seem like they're little more than rearranged from prior albums. Even tunes like "Symptoms" with its cool melodic intro riff seem to labor under some very predictable heavier guitar patterns, like the band is constantly engineering its riffs for full moshability, and you can't fault them for keeping up with the times.

I think for fans seeking out the 'pure' Testament thrash aesthetics in 2020 this one is serviceable, like a Formation of Damnation seasoned by a dozen years of modernization. It sounded quite good blasting out of my car windows on some of my spins of the CD, but I certainly wouldn't mind if the band had the confident to spread its creative wings just a little further and perhaps craft a Titans of Evolution that offers a bit more nuance than just the expected professional musicianship and strong vocal delivery. A standardized riff-set, no real surprises other than a few death grunts and one shift into near-black metal territory during "Curse of Osiris". Decent, but they can do better.