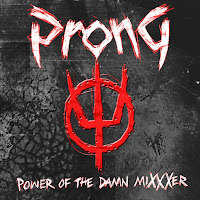 It's weird that anyone would feel that an average album like Power of the Damager would necessitate an album full of electro industrial remix tracks, but perhaps the band felt like they had strained a bit too much of that sound out of the album and wanted to toss the fans of records like Cleansing and Rude Awakening, or themselves, or the hypothetical industrial metal-based portion of their audience, a bone. Bring on a bunch of the band's friends from groups like Pitchshifter, Anthrax, Dope and even The Dillinger Escape Plan to tweak the knobs and see what they can do with this material, after all it was a partly forgettable experience to begin with, and perhaps this sort of collaborative experiment to bring out some sort of qualities in it we hadn't heard before...

I won't go that far in dubbing it a success, but what I can say is that Power of the Damn MiXXXer is at least far better than the atrocious Whose Fist Is This Anyway? remix EP from back in 1992. The mixers involved here seemed to give the tunes a good listen and try and extract the riffs, vocals and grooves into something almost dance-worthy that made sense. Granted, was anyone asking for an hour of industrial dance remixes from a band that had seen better days about 15 years before? Was a bargain bin KMFDM necessary when you could still enjoy (or endure) the real thing? Probably not, and this remains one of the more useless outings in the Prong canon, but there's no question that it was put together with some degree of care, with each of the original tracks being given its own shot at shining in this alternate format, and "The Banishment" getting two versions. Some of them feel like pretty generic rave beats with thrash guitars applied to them, but you do still get a little of the vague emotional impact from the choruses of the originals, even with those rhythmic differences.

One other thing I appreciated was that, having had problems with the production on Power of the Damager, a lot of that has vaporized here, as the guitars are given more cutting mixes, and in particular Tommy Victor's vocals actually sound far better here. A lot of the other things they added in like synth lines or industrial pulses are quite cut & dry, generic and don't show a lot of creativity if you've explored the techno or industrial genres yourself, but they'll do in a pinch. A few tunes like the title track get an even bigger evolution which almost feels like J.G. Thirlwell got to them, as in the original tune is abstracted more and its ideas translated more into the noisier synths and beats. This isn't necessarily a sign of higher quality, but at least Prong didn't want this all arranged to evoke too much monotony, you're getting a decent dynamic range, for instance the jungle mix of "Pure Ether" with the filtered, robotic vocals, quite a stretch from the original or even its neighbors here, but not ultimately that effective. So in the end, respectable, but I wouldn't say any of these were going to distract me from the better Prong efforts or any other EBM/industrial or electronica that I frequent.